Paul Flynn: These are the new flavours that have inspired me

I’d heard of umami, but never really understood it, so this dressing came as a revelation 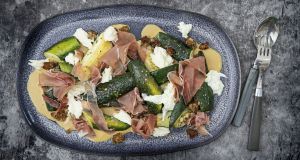 Today, I’m writing about some new flavours I’ve learned about along the way. They are for the curious cook who fancies an adventure. I can be a bit of a cynic. My eyebrows are permanently arched like some over-botoxed diva. Sometimes I feel I’m always ploughing the same culinary furrow. I don’t scare anyone’s horses. Maybe it’s time this old dog learned some new tricks.

I thought fermentation was for sandal-wearing tree-huggers. I still don’t know what it’s all about, but some chinks of light have started to permeate my stubborn brain. If something tastes nice, though, I’m instantly won over.

Visiting chefs have influenced me, most notably London-based Robin Gill. Every year for the West Waterford Festival of Food, we invite a notable chef from the UK to cook in the Tannery. Gill is originally from Dublin, and his food was something completely new to me. I’m a butter, pot, cook, eat kind of guy. His food was an epiphany.

I always try to learn from talented people in my kitchen, too. Some of them have been around the block when it comes to restaurants. They give me inspiration, and hopefully I give them the freedom to be creative.

Naturally, I’d heard of umami, but never really understood it, so this umami dressing came as a revelation to me. We use it with lots of things these days, from oysters to steak. With this salad it really shines. The depth of flavour is astounding and complex. Natural yeast is available in health food shops. Look for a brand called Red Star.

Yeast is not something I’ve ever used as an ingredient before. The cauliflower is cooked in a little brown butter first to give some depth. Apologies, it’s a little bit cheffy. The beetroot lends happy sweetness, and the seabeet is a bit of showing off, as I live by the sea and I wanted you to see how enlightened I’ve become. You can use another green.

Wasabi is more familiar. Mixed with sour cream, it makes a punchy alternative to regular horseradish, with some smoked salmon. This is a refreshing little starter that lets the butterhead star.

3 medium-sized courgettes
2 slices of brown bread, crusts removed and torn into small pieces
A good drizzle of olive oil
Some fresh thyme
Salt and pepper
A squeeze of lemon juice
2 balls of burrata or mozzarella
8 slices of serrano or Parma ham

Method
1 For the dressing, put everything except the sunflower oil and mayonnaise into a blender, then slowly drizzle the oil into the mixture until it emulsifies. Add the mayonnaise and blend briefly until it comes together. Put in the fridge until needed.

3 Top and tail the courgettes then cut them in quarters lengthways.

4 Put them on a tray with the brown bread, olive oil, thyme, salt and pepper, then turn everything in the oil.

5 Bake for 12-15 minutes until the courgettes are soft and golden and the bread is crunchy.

6 Divide the courgettes on to plates with some torn burrata. Add the lemon juice.

7 Spoon over some of the umami dressing, then drape the ham on top.

2 Wash the beetroot and wrap individually in foil, then bake in the oven until soft to the point of a knife (this could take up to two hours, depending on the size of the beetroot).

3 Put the butter into a pan over a medium heat and cook until it starts to foam, go brown and take on a nutty aroma. Be careful – don’t allow it to go too far.

4 Add the cauliflower and cook over a medium heat, stirring regularly for five minutes or so, until it starts to soften.

5 Add the milk and yeast and bring to a simmer.

6 When the cauliflower is cooked, allow to cool a little, add the creme fraiche and seasoning then blend it. Reserve until needed.

7 Peel the beetroot and cut into nice chunks.

8 Toast the buckwheat in a dry pan over a gentle heat for five minutes or so.

9 To serve, warm the cauliflower purée and spoon it on to a nice platter. Artfully arrange the beetroot on top, add a drizzle of rapeseed oil. Scatter on the buckwheat, followed by a few pretty green leaves.

Method
1 Mix the sour cream with the wasabi.

2 Divide the butterhead between four plates.

3 Spoon some wasabi cream on to the plates, then top with the smoked salmon, apple and dill.

Every breath you take: why you need to learn to breathe properly
8