Take a holiday from your usual fare with this week’s lamb souvlaki, goat's cheese and peach salad and gazpacho with a twist 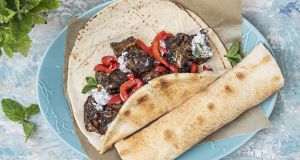 Summer was never kind to me. As a child we spent weeks on end on Clonea beach in Dungarvan while my parents worked in the chemist shop. The older ones looked after the younger children.

I spent my time eating sausages off a camping stove and peeling the top layer of skin off my body. I was a sun magnet, cursed with permanent sunburn despite being mummified in Ambre Solaire.

I’ve mentioned before that I’m a butter boy. I’m rooted in its loveliness, but summertime demands lighter food. This week’s dishes are a spiritual trip to the Mediterranean.

Olive oil was sold in our chemist shop for lubricating the wax out of auld fellas’ ears. Warmed, applied and plugged with cotton wool, it worked like a dream. You wouldn’t see Elizabeth David writing about that one.

I have a memory of eating souvlaki at dusk on a Greek island a long time ago, the warm fatty juices of the lamb melding with minted yogurt and dripping down my arms. I’ve never had another one until I made this. It’s normally cooked on a skewer over coals. I’m doing it in the oven.

I love using French beans in a salad – not the big, ugly, tough ones but fine ones that are sweet and yielding. The cooking is of paramount importance. This was drilled into me by Nico Ladenis, a famous and fearsome chef in his day. Beans had to be picked carefully at the root, leaving their ethereal tips, then plunged in a large pot of boiling salted water in batches.

The beans shouldn’t be al dente, that was a nonsensical fashion of the time that suppressed their sweetness. They were tested constantly while they cooked, as getting them wrong was not an option. A little bite remained as they were lifted from the pot and plunged into ice water to set their colour, their chlorophyll popping like emeralds. Here, I’ve paired them with ripe peaches and soft creamy goat’s cheese, a lovely light combination.

A good gazpacho is a lovely thing on a hot day. This version is a little fruity twist on the classic that I learned from Josef, a Catalan chef who worked for me years ago.

Method
1 You will need to marinade your lamb for at least four hours but preferably overnight.

2 Take a plastic bag and add to it the lamb, oil, paprika, garlic, oregano, lemon and seasoning.

3 Give it a good squish and put it in the fridge.

4 Set your oven to 200 degrees. Put the peppers on a tray, drizzle with oil and roast for 15 minutes or so until blackened and tender. Allow them to cool, then deseed and peel them.

5 Mix the yogurt with the mint sauce, honey and garlic and then chill until needed.

7 Drizzle a little olive oil on to a frying pan and heat until it begins to smoke.

8 Carefully tip the lamb into the pan, pick out the garlic and colour the meat on all sides.

9 Remove from the heat, add the water, cover and cook for one hour in the oven, until soft and tender.

10 To make the wraps, warm the flatbread and divide the lamb, juices, peppers and minted yogurt between them. Roll tightly, cut in half and serve.

Method
1 Cook the beans in a large pot of salted water. Have some iced water at the ready. After two minutes on a rolling boil, lift one out and test, there should be just a slight crunch.

2 Drain the beans and plunge them into the iced water to cool, then drain again.

3 Whisk the lemon juice with the caster sugar and olive oil, then add salt and pepper to season.

4 Dress the beans and onions with the lemon vinaigrette and divide on to plates or a single platter.

5 Cut the goat’s cheese into rounds and place around the beans along with the peaches. Scatter the almonds and mint on top and serve.

Method
1 Blend everything together really well in batches, then chill. Serve on a hot day in cold glasses.