With National Bread Week starting next Monday, we meet some of the growers focusing on Ireland’s ancient bread-making tradition 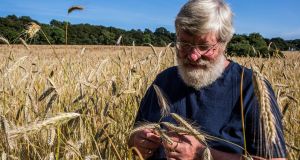 Andrew Workman: “Farmers in Ireland can produce flour that will make a great yeast loaf. It will be quite a bit denser than French or Italian bread, but it tastes great.” Photograph: James Forde

“I am currently growing 17 different varieties of grain that were once grown in Ireland, up until the 1930s,” says Fintan Keenan from Monaghan, about his work on an 80-hectare research farm and grain mill in Mørdrupgård near Copenhagen. He and the farm owner, Per Grupe, are growing 150 varieties of heritage wheats organically, for research purposes, from single square-metre plots to one hectare plots.

It makes Keenan the perfect man to cast light on the mystery of why there are the remains of 660 grain mills scattered through Ireland and yet we now barely use any Irish flour for baking. The few mills that have survived, such as Odlums, use only a small percentage of Irish flour to bulk out higher-quality flours from Canada, France, England and Italy. What has changed?

Furthermore, why do we claim soda bread as an Irish culinary tradition, when bicarbonate of soda was only developed in the mid-19th century? The true traditional bread of Ireland is sourdough. It has to be: wild, natural “sourdough” yeasts and contaminated brewer’s yeast was all that was available to make bread rise until the technology to select and desiccate a particular strain of baker’s yeast was developed a century ago.

“Yeast bread requires high protein or gluten levels in the flour,” says Andrew Workman of Dunany Farm and Mills, whose family has been farming an area near Clogher Head, Co Louth, for four generations, “and the varieties of spring wheat we now grow cannot yield high protein in warmer climates, but our problem is lack of consistent sunshine. I use the analogy of a rubber balloon: if you don’t have enough rubber it will burst. That happens with Irish flour, it can’t hold the same amount of bubbles, but the taste is what we can win on, and it makes very good soda bread.”

So, it seems that soda bread has become traditional because it suits the qualities of Irish flour, but in Waterford their traditional bread was the blaa, which was a naturally fermented (sourdough) white bun that would have required strong (high-protein) flour to make it rise. How was this achieved with Irish wheat?

This is the quandary for Fintan Keenan at Mørdrupgård research farm, where Per Grupe has spent 25 years scouring the world’s gene banks to track down heirloom varieties of wheat that were collected by botanists and agricultural scientists long ago and stored as seed specimens. “A lot of the heritage varieties we have are Scandinavian, from the Nordic Gen Bank in Sweden, ” says Keenan. “The beauty is that in Sweden they kept their old varieties in the hills of mid-Sweden, even after the Green Revolution, whereas the Danes converted straight away to conventional agriculture, and got rid of all their old varieties.”

Keenan was particularly interested in finding viable old Irish varieties that he could trial on his brother, Turlough’s, farm in Monaghan. He wondered might these have had higher protein levels than the current commercial varieties. “I found Irish wheat specimens in seven different gene banks around the world – the US, Poland, the Netherlands, England, Germany and in Scandinavia. Our plan was to multiply them over here in Denmark and then see if they were suitable for growing in Ireland, but in fact we ended up sowing them in Monaghan last November because the weather in Denmark was so wet and they are currently looking extremely healthy.”

Robert Mosse of The Little Mill in Bennetsbridge is also working with local farmers to find varieties of wheat that will produce high protein levels in Ireland. The Mosse family has been milling for seven generations in Kilkenny, and their stone mill was originally water-powered with foundations on the river Nore dating from 1501, They use 100 per cent Irish wheat for their plain wholemeal flour, but for their “strong” flour they use two-thirds Irish wheat mixed with one-third Canadian wheat to provide adequate protein.

“Last year we grew some heritage varieties of wheat with a local farmer which gave excellent results in terms of bread-making qualities but poorish yields,” says Mosse. “We are working to improve that situation by better crop management. With that said, we would be willing to take a lower yield for quality. The biggest issue will be consistency year on year; for example, this year has been problematic for planting.”

Andrew Workman echoes this: “Occasionally, one out of every five or 10 years we get a great summer and suddenly all the millers in Ireland become very excited because they can source their wheat in Ireland, and will claim that they buy Irish wheat, but next year the quality will drop again. Basically, what we need to do is to turn the clock back to before white bread came into fashion when Canadian wheat arrived. We need to re-establish our traditional bread. Farmers in Ireland can produce flour that will make a great yeast loaf. It will be quite a bit denser than French or Italian bread, but it tastes great. Fintan [Keenan] gets proteins of 16.1 per cent in his wheat in Denmark, but in Ireland if we can get up to 9 per cent, we’re doing okay. We’d be over the moon if we occasionally got 10.5 per cent.”

Keenan’s trials of the heirloom Irish wheat varieties are still at an early stage, but he is confident that he can achieve higher protein yields than that. “There is one variety called Red Stettin, which is looking hopeful,” says Keenan. “It was gifted by Sultan Abdül Medjid of the Ottoman Empire to the people of Ireland during the Famine in 1847, according to lore. He wanted to send a gift of £10,000 to the famine-stricken people of Ireland, but Queen Victoria was only giving £2,000, and he couldn’t outdo her, so, he sent three boatloads of wheat instead.”

The Red Stettin arrived in Drogheda and instead of being milled into flour it was spread throughout the country, becoming a staple Irish wheat. Prof Seamus Caulfield, formerly of the school of archaeology at UCD, remembers it being grown on islands off the west coast. It was called Ruadhán at that stage.

“There were four different strains that you can still find in gene banks and I’ve been growing them out,” says Keenan. “One of them, Red Stettin 13, and another, Red Stettin A, are absolutely beautiful. Huge ears on them. They look really promising. The last mention of them growing was in Thurles in 1927 and nothing since. So, hopefully we can get them started again. But, when you start off from a gene bank with 20 seeds it takes five years before you have enough for an acre. It’s a very slow process, but so far it looks good.”

Last year, Keenan sent 500kg of prized heritage varieties of wheat from the Island of Öland, off the coast of Sweden, to Mosse, who grew it on 10 acres in Kilkenny in conjunction with a local farmer and they got an impressive 12.6 per cent protein. There are currently farmers in Wexford trialling French varieties who hope to reach 14 per cent protein, but Workman says it is important to remember that some farmers are using high levels of nitrogen fertiliser to achieve these levels and that some even spray off the crop with glyphosate before harvest to maintain high-protein figures. (This practice of spraying the toxic herbicide on grains directly before harvest is, shockingly, the norm in Ireland and is still being recommended by Teagasc. )

Conscientious mills, like Mosse’s, test their grain to ensure it has been ripened naturally without glyphosate and organic farmers, like Workman, use no chemical fertilisers or herbicides on their land. Instead, Workman rotates his crops of wheat, spelt and rye at Dunany Farm with naturally nitrogen-fixing plants like red clover and combi-crops of oats and white clover as green manure. “We are managing to grow wheat that makes good bread, though it depends on what your definition of good bread is. It makes very good traditional soda bread.”

He is curious, but cautious about returning to old varieties because of the problems of lodging: “The old strains of wheat invariably have tall stalks, and in wind or rain they fall over, which is what lodging means. They just can’t be harvested with modern machinery, while modern short varieties will stay standing no matter how much rain and wind they get.”

And, so it seems, to be sustainable in our bread production in Ireland we must accept denser, less frothy loaves, made with local grains, or else hope that one of the forgotten, superannuated wheat varieties that Keenan is trialling takes off commercially, in which case a new traditional Irish bread, as aerated as a croissant and as crispy as a baguette, might usurp the sliced pan on the Irish breakfast table.