Masa: New Dublin Mexican is nearly there with signs of improvement

Review: If it perfects its Mexican craft, this will be a spot for an authentic experience 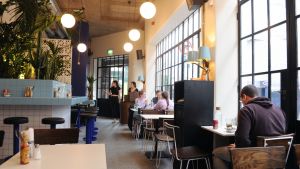 We had one of our best ever holiday meals at Taqueria Honorio in Tulum on Mexico’s Yucatan peninsula. On a hot afternoon we sat under the roadside awning and ate off plastic plates covered in clear plastic bags. (The wash up consisted of binning the used bag and tying on a clean one).

Tacos were the peso equivalent of 70 cent, not the hard taco shells we know from supermarket packs but soft, freshly-pressed corn tortillas the size of saucers topped with ridiculously tasty meat and vegetables. Later I read that Honorio slow roasts its pork for hours in a fire pit with sour oranges and achiote, a red berry known in Europe as the food colouring annatto. Mexican cooks use it to flavour food. We use it to dye Cheddar cheese orange.

A few weeks later we sat at Lily Ramirez-Foran’s table in Picado on South Richmond Street and enjoyed some of the holiday flavours. We bought some masa harina, or flour made from corn maize and ordered a tortilla press. There was some trial and error with the stickiness of the dough and the pressure of the squelch (too thin and they disintegrate, too thick and they’re leathery) but very quickly we could make our own corn tortillas, a taste of Tulum, minus the firepit.

Then I spotted the tiny tacos printed on the paper obscuring the view inside John Farrell’s former Super Miss Sue in Dublin’s city centre. Up over the door the word Masa was written in metal letters. Corn tortillas, it seems, have arrived.

A handwritten sign is in the window the first night I try to eat there. It talks of unforeseen circumstances which mean they have had to close. So two nights later we’re back. It’s a 20-minute wait for a table. We’re happy to wait across the road in the bar of Brooks hotel.

Masa has probably the simplest menus of this year’s new arrivals, with properly small prices to go with their small plates, or in this case small prison-chic enamel bowls.

The long bar of old Super Miss Sue which was first a seafood counter and then an eating area has gone. They had a garage sale of the old fixtures. I hope those lovely marble topped tables found a good home. Now it’s all white and turquoise tiled like a 1950s Californian swimming pool. The tortillas are the softest things in the place. Everything else is hard and shiny so noise pinballs around underpinned with the thrum of bass from the sound system. We decide the collective noun for a table of shouting blokes is “a holler”. “Don’t make us sound like cranky oul’ ones,” my friend mouths, or at least I think that’s what she says. Bring an ear trumpet or some flash cards.

We get tap water with lime wedges in it without having to ask, which is nice, but it’s tepid as the drip from a boarding house bath tap. My favourite taco is the fish one. Fingers of cod have been coated in crisp batter and then popped into a soft corn tortilla with pickled red cabbage and a mayonnaise made with chipotles, the smoked dried jalapeno peppers that bring their lower, slower glow of heat rather than a sting. Finished with a squeeze of lime they’re great.

The chicken taco also rocks our boat (though I’ll only order this one again if I see the words “free range” on the menu). The chicken has been coated with a spiced batter that tastes like lime zest has gone into the mix. There are knives and forks but these are best rolled and hand-eaten with a claw-like grip over a bowl to catch the drips. This is slurpy, messy stuff. There are just two napkins so maybe the tepid tap water was for hand washing?

Less successful are the beef and mushroom tacos, though I think they suffer from the dip in temperature that’s happened by the time we get to eat them. (The food arrives almost all at the same time.) The biggest disappointment is the taco al pastor. This classic street snack is described in Niki Segnit’s brilliant book The Flavour Thesaurus as pork spit-roasted with pineapple.

“As it cooks the pineapple juice flows over the meat, simultaneously creating a dark-brown caramelised crust and tenderising the meat by means of a protease enzyme called bromelain, which breaks down its collagen.” In other words pork and pineapple meld in the most luscious way imaginable. Masa’s chewy cubes of pork in their al pastor have some ways to go to get to that nirvana. But it’s a start.

We ask for dessert but are told that they’re “still trying to get the marinades right” so they haven’t started doing pastry yet. So why the rush to open before that’s happened? If Masa perfects its craft as well as its concept it’ll be a great new spot for a noisy, messy, nearly Mexican experience. Until then pass me my tortilla press and fire up the frying pan.

Tacos for two with two small plate starters and sparkling water came to €37.15

Verdict: It’s not there yet but signs are that it will be

Facilities: Unisex and not aging well