‘One bite of that pizza, the like of which you could never get in Ireland, and a slurp of Irish tea' 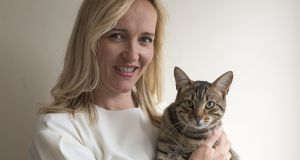 Throughout Food Month people will share with us their most treasured food memory. You can share yours at magazine@irishtimes.com

In 2010, after living in the scented fields of Westmeath for eight years, we decided to go back to New York, where we had previously lived for 10 years. It happened quite quickly. I flew over in March to meet with some contacts and by July we were packing up boxes in our farmhouse, preparing to leave.

During the three months prior to leaving, I was travelling back and forth as I had begun working with Donna Karan Home and was juggling this new landscape with letting go of the farmhouse I had so lovingly restored – and three children aged nine, 11, and a tiny one-year-old.

I wasn’t sure what I was letting go of exactly, or what I was stepping into. I had lived in New York for 10 years before, but that was when I had no children, and then again for a couple of years when my first two sons were tiny. Now I would have to navigate playgrounds, schools and work. What was it like to be a parent in one of the busiest cities in the world?

As you can imagine, I was nervous. But more than that I was excited, excited that this year, the year I would turn 40, I was turning my whole life on its head and for good or for bad, things would never be the same.

The journey from Westmeath to our apartment in Brooklyn seemed to take an unnecessarily long time. A five-hour flight doesn’t sound so bad, but leaving the house, waving goodbye to good friends and dear family, knowing you were breaking your mother’s heart, travelling to the airport, arriving in plenty of time for immigration in Dublin, waiting around with three children, and your life packed into five suitcases, the journey seemed like an epic escapade to a foreign land.

When we finally arrived in JFK, my then brother-in-law was there to meet us. There are few things more welcome to a very weary traveller than a friendly face in an airport. We drove the familiar road to Brooklyn, but the view was altered, altered by the addition of my children, my responsibilities.

I felt a heavy weight on my body, doubting myself. My stomach flipped. “It’s too late now”, I said in my head. We arrived to our apartment in Carroll Gardens in Brooklyn. It was late, very late for small children, and it was dark. The children ran through the apartment that was a third of the size of the house they had grown up in. They were excited, this was an adventure, it was supposed to be.

We dragged our suitcases up the stairs and a child said “I’m hungry”. I hadn’t thought about food. There was nothing in the apartment. Why hadn’t I had someone leave something in the fridge – ham, bread, butter, the staples? I couldn’t even make a cup of tea as there was no milk. I had, like most Irish travellers, a suitcase containing boxes of tea bags, but what was a cup of tea without milk.

I wanted to unpack, to place some familiar objects around the space, to mark my territory – photographs, a grandmother’s vase.

The most part of a mother’s job is feeding, in my experience. My brother-in-law offered to go out and find something to eat. Half an hour later he returned with two large brown boxes and a pint of milk.

A scent wafted behind him as he walked in, a scent of New York.

When he opened the lids, inside was a large sourdough crust pizza, bubbles of dough blackened by a wood fire, oozing mozzarella, bright tomato sauce and fresh basil.

“I just saw this pizza place, it’s around the corner.”

The pizza place he had stumbled upon was Lucalis, in Carroll Gardens. A destination pizza joint. People travelled out from Manhattan and stood in line to eat those pizzas. They ran out of dough at 9pm, sometimes sooner.

We sat of the floor, surrounded by half unpacked suitcases, the New York sirens echoing through the empty apartment.

One bite of that pizza, hot, melting, chewy, flavourful pizza the like of which you could never get in Ireland, and a slurp of our Irish tea made strong and hot. My two worlds colliding. Smash. Here they were for good or for bad. That pizza marked our arrival to the big city.

A Sense of Home, by Helen James (Hachette Books Ireland) has been shortlisted in the Best Irish Produced Book of the Year category, for the Bord Gáis Energy Irish Book Awards 2017