Are you dreaming of a spicy Christmas? 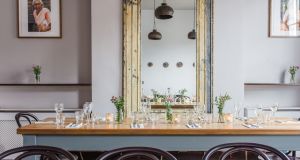 If turkey and ham is not your thing, and you are looking for a Christmas party venue, Kerala Kitchen on Upper Baggot Street in Dublin 4 is taking reservations for exclusive use of both of its dining rooms, and has just launched a new menu of south Indian small plates and curry bowls.

“We are following the typical Indian style of service, with all dishes coming as they’re ready. Food is brought to your table as it is prepared and the dishes are perfect for sharing,” says Gráinne Flynn, who runs the business with her partner, Lewis Cummings. Both are former newspaper executives and have spent time living in India.

“The new prawn moilee made me cry when I tasted it, as it brought be straight back to Kerala. Before I even tasted it, the aroma was so reminiscent of what I had eaten there over 10 years ago,” says Flynn.

Parties of up to 36 can book the first-floor dining room for their exclusive use, and 30 can be seated downstairs. As well as offering the option of booking entire rooms for private use, reservations will also be taken for parties of four and over. During December there will be two sittings, 5pm-7.30pm and 8pm-10.30pm.

Buttered eel, chicken fricassee, pees porridge and saffron bread . . . not your average Sunday dinner, but a menu from a cookbook written by Dublin woman Hannah Alexander, who lived with her family on Ship Street in the late 17th and early 18th century.

The candlelit dinner will be cooked by Mary Farrell, executive head chef at Morton’s of Ranelagh. Tickets are €78 and can be booked at jonathanswiftfestival.ie. There will also be a discussion about Alexander’s book, led by writer and folklorist Dr Deirdre Nuttall. The event is part of the Jonathan Swift Festival, which runs November 23rd-26th.

Nespresso but not as you know it

If you were finishing an exquisite lunch or a delicious, stand-out dinner at a restaurant with two Michelin stars twinkling over the door – and the weighty expectations that come with that – might you feel just a little underwhelmed at being offered a Nespresso coffee to sip with your petits fours?

Not so, according to Patrick Guilbaud, whose Dublin two-star restaurant recently became the Nestlé-owned coffee company’s Irish ambassador. “People seem to be very happy with it,” he says.

The pods Nespresso supplies to its Michelin-starred collaborators are not the ones you and I can buy online, or at one of the company’s fancy stores. The Exclusive Selection are two bespoke coffees – Nepal Lamjung from the foothills of the Himalayas, and Kilimanjaro Peaberry from Tanzania – which are made in extremely small quantities.

According to Nespresso managing director Francisco Nogueira, “Ireland is a very interesting market where people are getting much more curious about coffee, like they did about wine some years ago.”

Good news: Seven things that made us happy today
6