Now we know . . . What’s so spooky about barmbrack?

This very Irish Halloween tradition decided your fate, depending on what you found inside 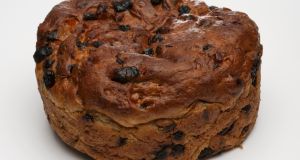 From the Jack-o-Lantern to the idea of spirits roaming the world for a night, many modern Halloween traditions can trace their roots back to Ireland. An autumnal tradition that hasn’t travelled too far, however, is our beloved brack, also known as barmbrack or bairín breac, which translates as speckled loaf.

To help me find out more about the traditions around brack, the chef and lecturer in Culinary Arts at DIT, Dr Máirtín Mac Con Iomaire, points me in the direction of Duchas (www.duchas.ie). On this website, you can scroll through a 1937 project by The Folklore Commission where schoolchildren collected stories from their parents and their grandparents.

In one of The Schools’ Collection, a student’s neat cursive scrawl captures the significance of the charms in a loaf of brack in a piece entitled “November’s Eve”. After a series of Halloween games that included apple bobbing, a barmbrack containing a ring, a piece of cloth and a stick would be cut. Whoever got the ring would marry, whoever got the cloth would be a nun and whoever got the stick would never marry. Having your fate decided by a cake seems like pretty terrifying prospect to me.

Mac Con Iomaire makes a link between brack and Christmas cake. “It’s at this time of year you would start to save luxurious ingredients such as imported fruits. These rich fruit cakes were a way of preserving raw ingredients, though brack doesn’t last quite as long as a traditional Christmas cake.”

The Irish haven’t forgotten about brack. We bake it all year round

In Clonmel, four generations of Hickey bakers have been in charge of the brack at Hickey’s Bakery & Cafe. The Hickeys have been making brack since 1900 and Nuala Hickey, who has been at the helm of the bakery for more than 20 years, still makes the brack to her grandfather’s recipe.

“Halloween has really made a big comeback in Ireland, hasn’t it?” Hickey tells me. “The Irish haven’t forgotten about brack. We bake it all year round in our bakery but it is the most popular at this time of year. We still put a ring in our brack, but we aren’t allowed to put a cloth or coin in it anymore.” The reason? Health and safety.

How much coffee should I drink? How much is too much?
10