Bananas past their best? Try them in this naughty banana bread

Vanessa Greenwood: This chocolatey banana bread is delicious for dessert with ice cream 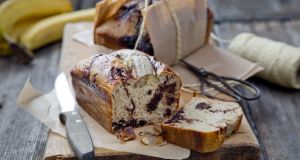 They are a nutritious staple in most home kitchens. But nothing looks sadder than a bunch of mottled brown bananas lounging in a fruit bowl. Other fruit such as pears, apples and grapes are more clear-cut. They are either ripe or not ripe.

Bananas provide a kaleidoscope of tastes, textures and sweetness as they travel along their journey from green to brown. I only buy bananas with a green hue on the peel. Within a day the skin turns daffodil yellow while the flavour changes from a slightly green-pepper taste to the perfect snacking sweetness.

Once they overstay their welcome in the fruit bowl, emitting a gas known as ethylene that accelerates the ripening of other fruits in close proximity, I watch them as one would any nemesis. It is a race against time to consume them before those ungainly brown specks appear. The taste becomes almost too sweet, the texture spongy.

As they teeter on the precipice, I often decide to let them go. Happily, this doesn’t mean throwing them in the bin, it just means removing them from sight – for the sake of good kitchen karma.

For me, a banana past its best heralds the delicious aroma of a freshly baked loaf of banana bread. If I don’t have the time or inclination to bake, I transfer overripe bananas to the freezer. They defrost in no time and can be used for banana bread at a later date (once defrosted, the banana flesh is soft and loose and much easier to incorporate into a batter by hand).

It is the caramelisation on the crust of a banana bread that I love most. Without it, it is just cake.

This chocolatey version is totally irresistible and doubles as a delicious dessert served with ice cream (serve with some extra melted chocolate sauce).

If you want to use up a large number of overripe bananas, simply double the recipe accordingly and add another 10 minutes to the baking time if you are using a 2lb loaf tin.

Variation Instead of chocolate, use other popular ingredients such as walnuts.  You can spice up banana bread with cinnamon, too. A squeeze of lemon never goes amiss.

Make the chocolate sauce by combining the cocoa powder, water and sugar.  Heat gently to combine, whisking out any lumps, then set aside to cool.

For the top of the loaf, select the least mottled banana and set aside with the skin on.

In a large mixing bowl, use an electric whisk to mix together the egg and sugar until thick. Stir in the vanilla essence.

Peel the rest of the bananas and use a fork to mash the flesh to a pulp. Add it to the egg and sugar mixture and whisk for a few seconds until fully combined.

In three batches, fold the sieved flour into the liquid mixture, stirring until just combined with no flour pockets remaining.

Peel the reserved banana and slice it in half lengthways. Roughly chop the other half and add into to the batter.

Spoon two-thirds of the batter into the lined tin. Pour half the chocolate sauce over, then cover with the remaining batter. Place the reserved banana slice – cut side facing up – on top of the mixture (spoon lemon juice over the cut surface of the banana along with a pinch of brown sugar to give a nice caramelised effect).

Bake in the preheated oven for 50-55 minutes or until risen and golden-brown on top. Once baked, a skewer inserted into the centre of the cake should come out clean. Leave the bread in the tin to cool before slicing. Serve with any remaining chocolate sauce.

The beginning of the end: 10 things to know about Covid-19 vaccines
10