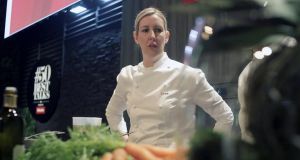 Northern Irish chef Clare Smyth has been named “best female chef" in the world at the World’s 50 Best Restaurants awards. At a ceremony in Bilbao on Monday night, the Antrim-born chef was given the award for her debut restaurant, Core by Clare Smyth, in Notting Hill in London.

Meanwhile, Italian chef Massimo Bottura’s Osteria Francescana was named the best restaurant in the world at Monday’s ceremony. His restaurant, which opened in 1995, was awarded the top spot for the second time – it also came first in 2016.

In second place, chef Joan Roca’s El Celler de Can Roca in Girona, Spain, climbed one place from last year, as did Mauro Colagreco’s Mirazur restaurant in Menton, France, which moved from 4 in 2017 to third in 2018. Eleven Madison Park in New York, which won best restaurant in 2017, dropped to fourth place after it closed for renovations for four months last year, while Gaggan in Bangkok climbed from 7th in 2017 to 5th for 2018.

Smyth moved to the UK from her family’s farm in Northern Ireland when she was 16, to study catering at Highbury College in Portsmouth. She went on to work at Terence Conran’s Michelin House restaurant and completed stages at the French Laundry in California and Per Se in New York before going on to work as chef patron at Restaurant Gordon Ramsey in 2007 – where she became the first and only female chef to run a restaurant with three Michelin stars in the UK.

She opened her Notting Hill restaurant in July 2017, which has since been named Best Restaurant at the 2018 GQ Food and Drink Awards.
However, the “best female chef” award has been a controversial addition to the World’s 50 Best Restaurants accolades.

Chef Anthony Bourdain questioned the need for a female category when it was introduced in 2013, tweeting “Why—at this point in history—do we need a “Best Female Chef” special designation? As if they are curiosities?  #2013 #50BestWhat?”

French chef Dominique Crenn, who won the “best female chef” award in 2016, but whose two Michelin starred San Francisco restaurant Atelier Crenn has never made the top 50, shared an Instagram post before the ceremony on Monday, quoting entertainment lawyer Nina Shaw from the #TimesUp movement: “I don’t need you to include me from what you excluded me from. We are not diversity we are normal. I want you to normalize your side til it looks like our side and recognize we should have been there all along.”

Why—at this point in history—do we need a “Best Female Chef” special designation? As if they are curiosities?
#2013 #50BestWhat?

Smyth – whose own restaurant was omitted from the top 50 – told the World’s 50 Best Restaurants: “We still have a real lack of women recognised at the top of the industry and we have to do something about that – we’re not going to change it by ignoring it… to separate [male from female chefs] for me is strange, but we don’t see enough women coming through at the top and we need to do something about it.

“I would love to see very soon that we don’t need gender specific awards because women will have recognition and there will be a balance in the industry. Hopefully we’ll see plenty of women on the 50 Best list and there won’t be a need for that award.”

There were five female chefs on the list this year, up from last year’s three: Pia Leon (with Virgilio Martinez) for Central, in Lima at number 6; Daniela Soto-Innes (with Enrique Olvera) for Cosme in New York at number 25; Elena Arzak (with Juan Mari Arzak) for Arzak, in San Sebastian at number 31; Ana Ros for Hiša Frank, in Kobarid, Slovenia at number 48; and Pim Techamuanvivit at number 49 for Nahm in Bangkok.

There were no Irish restaurants on the list, although an extra British restaurant was added this year, bringing to four the number of UK entries (all London-based) including The Clove Club, Lyle’s and The Ledbury. Heston Blumenthal’s Dinner restaurant, in Knightsbridge was also included, but it fell nine places from 36 in 2017 to 45 this year.
The highest new entry award went to Disfrutar (which means “enjoy”) in Barcelona. Set up by three former El Bulli chefs, it came in at number 18, while the highest climber was Den, in Tokyo, which jumped from number 45 in 2017 to 17 this year.

Bottura holds three Michelin stars at his restaurant, in Modena, Italy, where dishes famously come with quirky names, including “Oops, I Dropped the Lemon Tart” and “An eel swimming up the Po River”. A 10-course tasting menu starts at €250, while à la carte starters come in at €70 to €90.

The restaurant has found fame outside the food world, appearing in Aziz Ansari’s Netflix comedy Master of None and in Season One of Chef’s Table.
Accepting his award, Bottura told the audience of chefs in Bilbao “I’m going to use these spotlights for all of us to show the world that chefs in 2018 are much more than the sum of their recipes. We can have a very loud voice of change if we stay together.”

I’ve always told my firefighter Dad 'I love you' as he leaves for work, just in case
9