Jordan Bailey, formerly of Maaemo, is sticking to local ingredients for Aimsir, at Cliff at Lyons 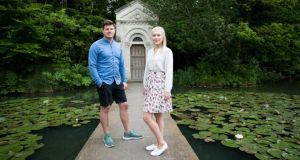 Jordan Bailey and his wife and Majken, who met four years ago at Henne Kirkeby Kro, the restaurant in Denmark where Majken was working. Photograph: Tom Honan

Watch out Irish gastronomes, something very exciting is coming. The former head chef from Maaemo, a groundbreaking Norwegian dining room with three Michelin stars, has come to Ireland to open a very unusual restaurant – and he has brought with him what he describes as a “secret weapon”.

Cornish-born chef Jordan Bailey and his Danish wife of two months, Majken Bech Christensen, a front of house manager, will open Aimsir, a 24-seat restaurant, at Cliff at Lyons in Co Kildare this autumn. September is being suggested as the likely opening date.

The restaurant will use only seasonal Irish indigenous ingredients, and will have an unusual layout, with the kitchen being located within the dining space. The prep areas and cooking “suite”, which will include an open flame pit, will be at the back of the room. The pass, where dishes will be finished and plated before being delivered to diners by the chefs, will be centre-stage, in the middle of the room.

“The style of service that we’ll be doing, I haven’t seen done before. We will be a lot more involved with the guests. Instead of having a chefs’ table, where you’re pulling the guests into the kitchen, we’re pulling the kitchen out to the guests,” Bailey says as we look around the site for the project.

The tasting menu will run from 10 to up to 15 courses, or servings, as Bailey prefers to call them, depending on the season. “Some will be just little light snacks.” The price point is still being finalised, but is likely to be between €105-€115 per person.

“It’s going to be ambitious, I think that’s the word that sums it up. We want to give people, hopefully, one of the best meals they’ve had, something new, something interesting. The secret weapon for me is having Majken next to me, because she just brings the perfect balance of being very professional but also very friendly at the same time.”

The couple met 4½ years ago at Henne Kirkeby Kro, the restaurant in Denmark where Bech Christensen was working. Bailey visited on a research trip for Restaurant Sat Bains, where he was then based. A post-dinner glass of Champagne sparked a long-distance romance, and this spring they walked up the aisle in the seaside church in Cornwall where Bailey’s parents and grandparents also married.

They have been living in Ireland for the past six months, and are renting a house in Naas. So how did they end up in Co Kildare, and what prompted the decision to leave Oslo?

“I’ve always had the dream of opening my own place, I think every chef does. For the last six months [in Oslo] it really started to settle in with me and I wanted to pursue that dream. I’d achieved everything I wanted to achieve at Maaemo,” Bailey says. He resigned last August, worked on a business plan, and put the word out that he was looking for a new challenge.

Doors opened, mostly in London, but also further afield. “He started to get offers to open restaurants in Shanghai and Singapore,” Bech Christensen says, while Bailey adds that those were “too far for us, we want to be close to family”. A chance meeting led him to Charles Oak, project manager at Cliff at Lyons, who invited him to visit.

The hotel, a collection of historic buildings in the grounds of Lyons Demesne, near Celbridge in Co Kildare, is best known as a wedding venue. It became part of Barry O’Callaghan’s Cliff Collection in 2016 and is a sister property of the Cliff House Hotel in Ardmore, Co Waterford, and the Cliff Townhouse on St Stephen’s Green in Dublin.

We’ll be paying a lot of attention to the drinks pairings, alcoholic and non-alcoholic, explaining them and why they work

“As soon as I got on to this property, I fell in love with it,” Bailey says. The former cookery school, set among pretty stone buildings, cottages and gardens, is being gutted and renovated to become Aimsir. A modern, glass-wall extension housing the bar will set it apart from the period buildings that surround it.

He describes the style of the restaurant interior as “very simplistic, very nature driven”, with a colour palette that will reflect a series of weather fronts, from cloudy to sunny, to chime with the name, Aimsir. “In simple terms it means weather, but if you go into it a bit more, it means weather and time. So that word describes everything we’re doing – we’re following the seasons of Ireland.”

The bar, for pre- and post-dinner drinks, will overlook 13 raised beds already planted with vegetables, herbs and fruit, and a giant cherry tree and a small orchard. Chefs and bar staff will pick herbs and flowers here just before service and the bar cocktail list “will have the same DNA as the restaurant, very seasonal and using things like this”, Bech Christensen says, pointing to the sparkling elderflower topped with a garden rose that we are sipping.

“We’ll be paying a lot of attention to the drinks pairings, alcoholic and non-alcoholic, explaining them and why they work. When you taste this, for example, you get the elderflower, but because you have the nose of the rose, it affects your palate,” she says.

The elderflower cordial was made that morning by Bailey, a keen forager who has been making weekly forays in to countryside with his friend Damien Grey, from Heron & Grey. “If the restaurant was open now, we’d effectively be working on two seasons, on the menu we’d be running now, and also preserving, pickling and fermenting for winter,” he says.

“The whole ethos behind the food is that I want to keep everything, all the ingredients, from within Ireland – so no olive oil, no chocolate, no citrus fruits. I had an Irish sous chef, Halaigh [Whelan-McManus], back at Maaemo, and he wouldn’t shut up about how amazing Ireland was, so I knew you had a lot of good stuff here.”

Even so, he says he has been surprised by what he has found. “We want to help promote Ireland because, I’ll be completely honest, when I was in Norway and England, I didn’t hear anything coming from here, which now, being here, blows my mind. I don’t know why Ireland is not as big a food destination as some other places. We need to get it out there.”

Bailey and Bech Christensen have been on an ongoing on a “grand tour”, exploring the riches of Ireland’s larder and meeting the producers. The can reel off a who’s who of artisan suppliers they intend to work with, but it doesn’t stop with the order book.

So, for example, Peter Hannan of Hannan Meats will be doing a new cut of lamb for them, one he hasn’t done before. Michael Finnegan will be maturing his Boyne Valley Bán goats cheese for double the time he usually gives it. Marita Collier’s Drummond House asparagus will be allowed to grow so high that offshoots will spring from the stalk – “it’s super tender and very sweet, like an intense version of asparagus,” Bailey says.

“These guys have done all the hard work for me, I just have to make it look pretty, and taste good. It has to taste good, flavour for me is the biggest thing, the aesthetics of it comes a lot later – pretty much just before service when it’s ‘ah, what are we going to make this look like?’.”

It needs to be fun. People cook better and give better service when they are enjoying where they are working

Bailey will have five chefs working with him, three of whom have already signed up, but can’t be named yet as they are still in jobs. “They’re from very, very good backgrounds, all at a level where they could probably have their own places. We want to create a family, people who are going to stay with us a long time, people who love to come to work.”

He refuses to be drawn on whether he is pitching his new venture at the Michelin three-star level he has come from. “I don’t understand when chefs say, ‘we’re going to go for our second star’. What does that even mean? What, so you’ve been holding back or not being as good as you can be for the previous year?

“I just want to do the best I can do, to be ambitious, to be constantly evolving and getting better.”

“And be happy doing it,” they both chime in unison.

“It needs to be fun. People cook better and give better service when they are enjoying where they are working,” Bailey adds.