National Burger Day: where to get your free burgers today

The best burger in Ireland comes from Handsome Burger, in Galway, according to the burger-eating public, almost 20,000 of whom voted for their favourites in this nationwide competition, which is part of National Burger Day. Video: Bryan O'Brien 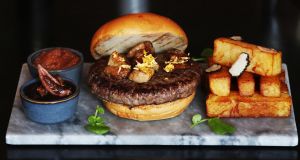 The Morrison Grill’s €40 La-Di-Da burger, made with luxury ingredients including wagyu beef, foie gras, gold leaf and fresh truffle shavings, is available on Thursday only

More than 500 food businesses – from takeaways and food trucks to restaurants and hotels – are offering two-for-one deals on burgers today, to mark National Burger Day. You can check out the full list of participating places and search by location or name, on an interactive map at nationalburgerday.ie.

At Handsome Burger in Galway, winner of a competition to find Ireland’s best burger 2019, in which almost 20,000 public votes were cast over a three week period, the people’s choice will be included in the offer between 3pm and 6pm.

This signature beef burger is made with a mixture of brisket, shoulder and chuck meat from Brady’s in Athenry, a fifth generation family butchers , and is topped with caramelised onions cooked for five hours in chicken fat, sugar and pepper; homemade pickled cucumber; secret burger sauce and melted Cheddar cheese.

The winning burger will also be on sale at the Handsome Burger stand at Eatyard, the permanent street food market in Dublin 2, between 5pm and 10pm today. It costs €8, before the two-for-one discount, at both venues.

The Morrison Grill at the hotel of the same name on Dublin’s Ormond Quay has created a La-Di-Da burger available for today only. The tongue-in-cheek, we hope, bling burger has a wagyu beef patty topped with seared foie gras and gold leaf in a brioche bun, served with triple cooked chips and fresh truffle shavings. It costs €40 – and is not included in the offer – although the other burgers on the menu are.

Also in Dublin, Captain America’s in Grafton Street and Blanchardstown (and also in Cork) are offering two-for-one on all burgers, from noon to close. Eddie Rockets is also participating in the promotion.

At The Marker hotel in Dublin 2,  a Charolais Irish beef burger, served with a Rockshore lager, is €20. If you prefer to eat your burgers at home, Lott's & Co in Dublin 4 has its range of FXB Butchers burgers on special for €5 for two, including the smoked brisket and chuck.

At Bujo in Sandymount, Dublin 4, where chef Grainne O’Keefe is culinary director, the scope of the deal is being expanded to include all burgers – vegan and vegetarian as well as beef (the national competition is sponsored by meat company Kepak, and only beef burgers were included in the vote). When two customers purchase burgers, a side and a drink, the second burger will be free of charge, between noon and 9.30pm.

In Kilkenny, Mark Williams is celebrating winning the “Most Creative Burger Build” category, a new addition to the competition, by including all three burgers on the menu at the steakhouse and cocktail bar in the offer, noon to 9.30pm.

Williams, who is a sixth generation beef farmer as well as restaurateur, rears the beef for the Burgers at Butcher himself, at Summerhill Farm in Thomastown, nine miles from Kilkenny city.

At West Cork Burger Company, on Washington Street in Cork, winners of the best gourmet burger in Munster, you can choose to have your burger made with Angus beef or wagyu beef raised in West Cork. For National Burger Day they are offering a special, with bacon, cheese, fried onions, mayo, barbecue sauce, lettuce, red onion, gherkin and tomato, for €11 (for two).

Another regional gourmet burger winner, Flipside in Sligo, is making its entire burger menu available at two-for-one pricing, between noon and 6pm. In Killarney, K Town is bringing back its Brat Burger (two 5oz patties, sautéed onions, bacon, coleslaw, cheese and Dijon mustard, on a charcoal bap), just for today.

Not all burgers come in buns, says pizza delivery company Domino’s, which is muscling in on the action by offering its cheeseburger pizza for €23.88 (medium) and €28.99 (large) in a Double Deal two-for-one promotion on Thursday. The toppings include everything you’d find in a classic cheeseburger – ground beef, cheese, tomato sauce, onions, gherkins, and burger sauce.

*Gourmet Burger Kitchen, although originally included in the list of businesses participating in the promotion on the National Burger Day website, is not offering the two-for-one deal.

Revealed: Where to find Ireland’s best breakfasts and brunches
8

Health Hints for the Home: Worms in children
10