11 great restaurants for a special occasion

From The Irish Times’s Delicious List 2019: fine dining without overdoing the formality? We think these hit the spot 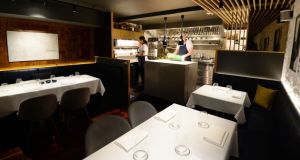 Liath NEW
Blackrock Market, 19a Main Street, Blackrock, Co Dublin; 01-2123676
Damien Grey’s follow-up to the hugely successful Heron & Grey has already surpassed the original, with a tasting menu consisting of his most spellbinding dishes from the past few years and a newly revamped room that feels more like Scandinavia than south Co Dublin.  Lisa Cope

Locks
1 Windsor Terrace, Portobello, Dublin 8; 01-4163655
Cosy in winter, washed with shimmering canal light in summer, Locks is one of my favourite restaurants anywhere. It has a lot to do with the calm sense you get when you walk in here that you are among people, chefs and front-of-house staff who know precisely what they’re doing and how to do it. Catherine Cleary

Ox
1 Oxford Street, Belfast; 048-90314121
Chefs still get in a spin about fine dining in Ireland, try too hard, throw too many things into squeezy bottles and get so stressed about it all that you can nearly taste the hydrocortisone on the plate. Stephen Toman knew exactly what he wanted to do in Ox when he opened it with the king of front of house Alain Kerloc’h six years ago. The aim was to keep getting better. And it has. Ox is wonderful. CC

The Tannery
10 Quay Street, Abbeyside, Dungarvan, Co Waterford; 058-45420
The chef Paul Flynn and his wife, Máire, didn’t invent the idea of a world-class restaurant in a small town. But they’ve been doing it for more than 20 years in Dungarvan, hosting cookery-school students, visiting celebrity chefs (who talk of memorable Downeys Bar experiences for years to come) and greenway explorers. The food is stellar – and what has also endured is the pride that they are doing this in their beloved hometown. CC

Aimsir NEW
Cliff at Lyons, Lyons Road, Celbridge, Kildare; 01-6303500
Aimsir is the new fine-dining restaurant on the block. The restaurant in part of the old cookery school at the Cliff at Lyons, in Co Kildare, sees the former Maaemo head chef Jordan Bailey and his wife, Majken Bech-Bailey, bringing Danish, Cornish and Norwegian influences to a locavore menu. Everything but the sugar has been sourced on the island. And that’s not for the want of trying. (They found two sugar-beet growers and almost burned down the kitchen in the attempt.) The food is dazzling, the service brilliant and bookings like hens’ teeth. CC

Ichigo Ichie
5 Sheares Street, Cork; 021-4279997
Sitting at the chef’s counter in this black-box space, you could be anywhere where deliciousness is taken deadly seriously. Dinner here could be intense, but it’s not, thanks to the combination of happiness and cooking skills that Takashi Miyazaki brings to his dream restaurant. You are watching a man in his element, and the food he hands you tastes of joy. CC

The Greenhouse
Joshua House, 21 Dawson Street, Dublin 2; 01-6767015
Occasion dining with all its props – the linen, the Frenchness, the heel-clicking precision service, the sterling-silver table scrapers – have been getting a bad rap in recent years as the trends rush towards informality. But Mickael Viljanen has continued to fly the crisply starched flag. It helps that he’s got a fiendish flavour sense and works French classics to perfection in the service of meals that are truly occasions. CC

Canteen Celbridge
4 Main Street, Celbridge, Co Kildare; 01-6274967
Some chefs still think “posh” food must involve ingredients from high on the hog, the fois-gras-and-fillet-of-beef school of cooking where it feels like an algorithm set to bling has composed the menu. James Sheridan’s menus are always interesting and personal, not in a whacky fashion but in a “here’s a chef who’s thinking” sort of way. Sheridan’s partner, Soizic Humbert, brings total professionalism to front of house. They’re a great team, and this is a great restaurant. CC

Variety Jones NEW
78 Thomas Street, Dublin 8; 01-5162470
We are barely two generations removed from people who learned instinctively how to cook over fire, the predominant method of most Irish households. Knowing how fire works is a central plank of Variety Jones, a wonderful addition to Thomas Street in Dublin. The fire became central almost accidentally when Keelan and Aaron Higgs, who are brothers, couldn’t get their gas hob connected. Now it’s a crucial part of the wonderful cooking that’s happening here. Earned a Michelin star in October. CC

Dax
23 Pembroke Street Upper, Dublin 2; 01-6761494
Graham Neville’s cooking feels slightly under the radar. First he was in the member’s club that was Restaurant FortyOne, on St Stephen’s Green in Dublin. Then he moved to the business-district basement restaurant that is Dax. Throughout that cooking career he has been creating the kind of food that would be starred in another city. His food is subtle and utterly delicious. CC

Forest & Marcy
126 Leeson Street Upper, Dublin 4; 01-6602480
If there were a poster child for modern Irish food in the capital, it’s hard to think of a better candidate than Forest & Marcy. If there were a poster dish, the fermented potato bread with bacon and cabbage would win every time. Ciaran Sweeney and team quietly go about their business in this neighbourhood kitchen, taking the best Irish produce they can find, doing little to it and making their guests very happy. LC