Irish companies have their (confit) ducks in a row

All in a label: The story behind the ducks, the farmers and the process 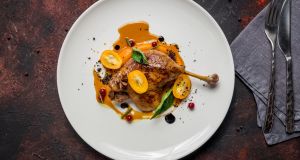 West Cork or Monaghan? Skeaghanore or Silver Hill? Those seem to be the options when it comes to choosing ready-cooked duck from most supermarkets here.

It’s not a bad choice given the quality of the products from these two farms.

But what can you tell from the packaging on their products?

Silver Hill Farm is probably the best-known duck producer in the country and its own label, Slow-cooked Confit duck legs, can be seen in such shops as SuperValu.

The packaging tells the story of how Ron and Lyla Steele set up the business in 1962 before handing over to their son Stuart. It now produces more than four million ducks a year mostly for export. The packaging also says: “Exclusive Irish Silver Hill duck, 100 per cent natural and Irish. Fresh from the family farm and fed on a natural diet.”

Exclusive seems like an odd word choice when discussing a duck, until you know that there is a Silver Hill breed, which was developed at the farm in Emyvale and is reared there.

To claim that the product is “100 per cent natural” might seem a stretch. But this marketing term is not used lightly. The Food Safety Authority of Ireland offers guidance on what is acceptable when using it, including that the ingredients were “formed by nature” and have not have been significantly interfered with. This stacks up as the ingredients are simply duck (97 per cent), seasoning and duck fat. The seasoning is sugar, salt, garlic and spices. There are no other additives or preservatives.

The packaging also says: “Complete traceability.” This refers to the fact that the birds are reared, processed and cooked at Silver Hill’s own facility. That is confirmed by the farm’s Bord Bia identity code of IE 801 EC as seen in the circle below the address.

It also says there is “no added water”, which is good to hear as some poultry producers inject water into their birds to make them heavier and juicier.

So is the Lidl version better? No, it’s as similar as it can be, allowing for the fact that the awards were judged quite some time ago and those particular ducks are long gone. In addition, it’s up to the retailer whether they enter the product for those competitions and then put the stamps on the packaging if they win.

Skeaghanore’s products, which sell in Dunnes Stores under the Simply Better brand, don’t have any awards mentioned on the label. That’s not to say that its duck doesn’t deserve any. On the website, you will see recent awards from Blas na hEireann for the confit duck legs, as well as Great Taste and the Irish Food Writers Guild for other duck products such as smoked duck breast. Owner Helena Hickey says it is simpler to keep the website and Facebook page updated than cluttering up the packaging.

Skeaghanore farm, which is near Ballydehob and has been breeding ducks for sale since 1994, is a much smaller operation than Silver Hill’s and it processes tens of thousands of ducks a year. Its confit duck legs have no unusual additives or preservatives either. As they are cooked, chilled and sealed on site, there is no need.

The number in the circle on the back of the box – IE 2894 EC – tells you that it is a “low-throughput” slaughterhouse and meat processor doing cutting, ready-to-eat and storage all in Co Cork. This is explained on the website of the Food Safety Authority of Ireland.

Silver Hill was sold to Fane Valley, an agri-food giant based in Co Armagh, earlier this year, though management has stayed with the operation. Fane Valley, a farmer-owned co-operative with an annual turnover of about £500 million (€560 million), had been supplying animal feed to Silver Hill for 20 years. Whether the sale will affect the ducks remains to be seen. Skeaghanore is still owned by the Hickey family and there are other producers too.

Confit duck legs are expensive, but then Ireland is a high-cost economy for business and the price you pay for duck isn’t going on commercials featuring Hollywood stars.