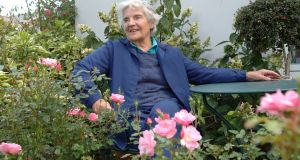 It was the meeting that almost never happened. On a sunny afternoon on May 16th, photographer Joleen Cronin and I were perched on the edge of squishy sofas in the yellow drawing room at Ballymaloe House, waiting to see if our journey to east Cork had been in vain.

We were there to get a privileged look through some of the personal papers and diaries belonging to Myrtle Allen and to talk to some of the family members and staff who knew her best. But really, it was Mrs Allen we were there to see, if her health on the day permitted.

Although she was a late convert to the professional kitchen – she was 40 when she first started cooking for paying guests - Myrtle Allen became the first Irish woman to earn a Michelin star, which she retained for five years (1975-1980). Her influence extended beyond Ireland too. She was co-founder of the European chefs group, Euro-Toques International, with Paul Bocuse and Juan-Mari Arzak.

By 1981 she was showing the French how it should be done, opening La Ferme Irlandaise, a restaurant showcasing Irish produce, in Paris. Her French peasant soup became Connemara broth on the menu there, but otherwise she stood firm to her ethos of sourcing the best seasonal produce, and treating it simply.

Rather than serve the elaborate French-influenced dishes that were regarded as “restaurant food” at the time, she took the radical departure of locating the best local produce and doing as little as possible with it. Now, more than 50 years later, this ethos is followed by some of the best restaurants in the world.

But it was a move that was considered rebellious at the time. “She was serving mackerel! Mackerel wasn’t a restaurant fish then,” her daughter-in-law Darina Allen said.

At home, she taught generations how to cook good, simple, uncomplicated food, through her newspaper columns and books, and was a tireless campaigner for the protection and promotion of great Irish ingredients, and the people who produced them.

She also carved a new niche in Irish hospitality, spotting a gap between what was offered in hotels and in B&Bs with the establishment of Ireland’s Blue Book, the marketing group that promoted country house hotels, with 10 other founder members.

I’d never met her in person before our appointment last month. She had been suffering from dementia, and had good days and less good ones, we were told. That day was a good one, happily, and after enjoying lunch in the Ballymaloe dining room, where she ate all her meals, Mrs Allen was ready to see us.

Aged 94, she looked well, concerned for the appearance of her hair as her photograph was taken, and keen to sample the coffee cake served with tea at a table outdoors in the sun.

“Come any day,” she quipped when I said I’d brought the sunshine with me to east Cork. When I asked if I could join her, she nodded and said “Yes, sure, if you can find a chair”.

But her responses didn’t all land where they should. Dementia had muddled her famously sharp mind and dulled her wicked sense of humour.

Or was that a glimpse of it again? “I’m not going to scratch you” she retorted when I touched her hand gently as I got up to leave after tea, perhaps not altogether happy with being patted rather than graced with a proper handshake.

Because Mrs Allen, a formidable trailblazer for Irish food, at home and abroad, and a forceful campaigner on issues surrounding food production, never did anything other than “properly”, and thoroughly.

Exactly four weeks to the day after that sun-warmed Wednesday afternoon, Mrs Allen, as she was known to all, died in hospital, surrounded by her family. She leaves a legacy that has made an indelible mark on the Irish food and hospitality industries.

Can buying the right petrol save your conscience and the planet?
7