The food pioneer, campaigner and cook revolutionised how the world views Irish cuisine 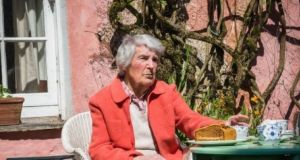 Myrtle Allen, matriarch of the Ballymaloe hotel, cookery school and food business family, has died at the age of 94. A statement from her family said “she passed away peacefully at Cork University Hospital on Wednesday, June 13th".

She had been suffering from dementia, but was otherwise in good health until a recent bout of pneumonia. She is survived by her six children, 22 grandchildren and 36 great grandchildren.

Mrs Allen was a founder member of Euro-Toques International and served as its president from 1994-1997, serving alongside Paul Bocuse. She opened The Yeats Room restaurant in her family home, Ballymaloe House in Shanagarry, Co Cork in 1964, and held a Michelin star from 1975-1980.

She was the author of several cook books and wrote cookery columns in The Irish Times and The Farmers’ Journal . In the early 1980s she also ran a restaurant in Paris, La Ferme Irlandaise.

Mrs Allen had not planned on a life in the kitchen. “I unexpectedly found myself married to a card maniac who is also a gourmet,” she wrote in her first Irish Times column, published on January 5th, 1991. She was referring to Ivan Allen, the farmer and vegetable grower with whom she began married life in 1943, completely unprepared for the role of domestic goddess.

“I did not play cards beyond snap in the nursery, and vaguely felt that I was meant for something else, and that I couldn’t cook,” she confided. “The night we arrived home from our honeymoon my husband taught me how to make his great bachelor standby, scrambled eggs with mushrooms.”

However, Mrs Allen would become one of the foremost professional cooks of her generation, and in doing so would inspire and foster the ambitions of future generations of her family, including her daughter-in-law, Darina Allen, and TV presenter, author and tutor Rachel Allen, Darina’s daughter-in-law.

Irish chefs and food writers have been reacting to the news of Mrs Allen’s death.

Georgina Campbell, president of the Irish Food Writers Guild told The Irish Times that Mrs Allen is “the towering figure of Irish food. Although she was in her 90s her death has come as a great shock.

“She was such a quietly determined figure; a strong, hard-working woman. It’s extraordinary to think that she started the restaurant as a second career, when she’d raised her family and had space in the house to do it.”

Mrs Allen’s role in promoting Irish food and hospitality went far beyond Ballymaloe’s walls, Campbell said, including her role as a founder member of Ireland’s Blue Book, a collection of country houses and historic hotels. “She not only made a huge difference to Irish hospitality, but she saved many Irish country houses around Ireland. She showed people how to do it whether they were in the Blue Book or not.”

Campbell also highlighted Mrs Allen’s commitment to “good simple, down-to-earth food” and the producers who make it possible. “I always think of the time a producer came to the door of the kitchen when she was starting out, to sell food to her, but didn’t know what to charge for it. Myrtle said “How much do you need?” That was her way with producers, they must be supported, to make it worthwhile, so they could do their job with dignity. I hope we honour her message.”

Speaking to The Irish Times, Graham Neville, commissioner general of Euro-Toques Ireland, and head chef at Dax restaurant in Dublin, said: “I’m a little bit shocked. She’s been a huge inspiration to generations of chefs and a role model for lots of us to follow."

Of Mrs Allen’s role as a founder member of Euro-Toques, a community of chefs and cooks which aims to preserve Irish culinary heritage, Neville said: “You could say she dedicated her life to food, and food history and the story of Ireland. She put us on the map. My thoughts go out to her family today.”

Mrs Allen’s role in nurturing young chefs and cooks was noted by both Campbell and Neville, who said: “The striking memory I have of Myrtle would be from about 20 years ago when my wife and I gave her a lift from Brooklodge in Wicklow to the airport. So for about two hours the three of us were in the car. She was full of stories, she almost knew where each blade of grass was grown. It was in her DNA. I got a real sense of her attention to detail - what most people might see as small, she saw as huge and important.

“As much as you think something is very simple, it’s important to get it right. Myrtle always worked hard on the foundation, once that is rock solid you can build on that.” He pointed out that this has passed on down through the generations at Ballymaloe “they’ve built a lot of different businesses down there and it’s a credit to her and her foundations”.

“Her solid base and attention to detail are what I’d try to emulate in my career.”

Sallyanne Clarke, of l’Ecrivain restaurant in Dublin said: “This amazing lady started Ballymaloe House to show Ireland and the rest of the world how our own Irish fresh local ingredients were the way to go. In the old days we imported so much. Myrtle showed us all how to utilise fresh local ingredients available on our doorstep, and to be proud of our heritage by supporting our local artisan producers. The entire food industry owes so much to the ‘Mother of Irish Cooking’. She was a rebel in her day with passion and a mission. She never stopped promoting our food and indeed our home-grown chefs and cooks too. We owe her a debt of gratitude.”

Sally and John McKenna of McKenna’s guides said on Twitter: “Mrs Allen was one the most important individual creative talents in the history of the Irish state. She inspired everyone she met. We were fortunate to have the opportunity to make this short film with her five years ago about her work. RIP MyrtleAllen.”

Chef and owner of Aniar restaurant in Galway, JP McMahon, said : “Myrtle was the foundation of new Irish cuisine. Since the 1960s, she has cooked and campaigned endlessly for Irish food, for our farmers, for our producers, for chefs. What we do in Aniar today is directly connected to her legacy. She was a Titan, a powerhouse. She is probably the most important Irish chef of the 20th century and some one who continues to influence my thinking in relation to Irish food.”

Can buying the right petrol save your conscience and the planet?
9