Anthony Bourdain: Food on the Edge 2018 to be dedicated to chef 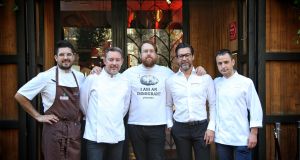 Food on the Edge 2018, the international chefs’ symposium which will take place in Galway in October, was launched at Albert Adrià’s Hoja Santa restaurant in Barcelona on Monday evening.

The event was addressed by the Irish ambassador to Spain, Síle Maguire, as well as event director and Irish Times columnist JP McMahon, who revealed that this year it will be dedicated to the memory of the late chef, writer and TV presenter Anthony Bourdain, who died last week.

“The issue of mental wellbeing in the industry was one that developed organically in last year’s symposium but was very prominent and became a key topic. This year, we will dedicate the symposium to the memory of Anthony Bourdain in the hope that it will highlight the importance and seriousness of the issue.”

Internationally known chefs Matt Orlando of Amass in Copenhagen and Sasu Laukkonen of Ora restaurant in Helsinki have been named as the co-hosting MC’s and will also be running masterclasses on the topics of “Zero Waste in the Kitchen” (Matt Orlando) and “Working with Farmers” (Sasu Laukkonen).

This year’s panel discussions will be hosted by London-based Irish chefs, who will talk about their opinion of Irish food and what the future holds for their careers.

The list of speakers signed up includes leading international chefs who feature in the current World’s 50 Best Restaurants list, the 2018 edition of which is due to be announced in Bilbao on June 19th – Andoni Luis Aduriz (Mugaritz restaurant in San Sebastian); Albert Adrià (el Barri group in Barcelona); Jorge Vallejo (Quintonil restaurant in Mexico City); Vladimir Mukhin (White Rabbit restaurant in Moscow) and Dan Hunter (Brae Restaurant in Sydney).

Among the Irish chefs taking to the stage will be Neven Maguire (MacNean House & Restaurant), who will be in conversation with Andy McFadden from Glovers Alley.

Irish chefs attendance at the event included Ross Lewis and Eric Matthews from Chapter One restaurant in Dublin and Jonathan Keane from The Lodge at Ashford Castle.

The fourth Food on the Edge will take place at the National University of Ireland (NUIG) on October 22nd and 23rd and will be a mixture of 15-minute talks by speakers, panel discussions and masterclass sessions. The early bird price for a two-day ticket, available until August 31st, is €300, which includes access to all sessions, plus lunches and entry to the wrap party. Bord Bia and Gather & gather are the principal event partners, with support from sponsors Estrella Damm and San Pellegrino. See foodontheedge.ie.

“We are very much looking forward to welcoming attendees and speakers from all over the globe to the fourth year of Food On The Edge. As always, we will continue to promote the strength of Irish food to our international speakers and visitors and use the event as platform for sparking conversation and action and for improving and educating Irish chefs,” JP McMahon said.

Paul Flynn: Three delicious dishes you can bank on this weekend
Real news has value SUBSCRIBE