Most influential Irish chefs and restaurateurs in London revealed 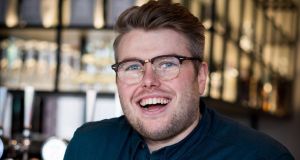 Cormac Gibney, bar manager, appears on the list for the first time

The list, published annually around St Patrick’s Day, identifies Irish people who have made significant contributions to the hospitality and food and drink sectors in London.

There are 57 entries on the list this year, the largest in the six years the compilation has been drawn up by siblings Catherine and Gavin Hanly, who run the London-based eating out guide, Hot Dinners.

In the past 12 months, four new Irish-run restaurants have opened to great fanfare and critical acclaim in the UK capital, and a fifth is on the way. The teams involved all feature prominently in the list. Cavan-born chef Adrian Martin makes the list for the first time. He is soon to open his first restaurant, Wildflower, at Buck Street Market, a new shipping container development adjacent to Camden Market.

Tallaght-born chef Anna Haugh – one of the presenters of the revived BBC1 show Ready, Steady, Cook – opened Myrtle, named after Myrtle Allen, in Chelsea in March. In May, Robin and Sarah Gill’s restaurant empire expanded to include the critics’ darling, Darby’s, in the Ballymore Group’s Embassy Gardens development.

Later in the summer head chef Patrick Powell and restaurant manager Conor Daly brought a distinctly Irish feel to Allegra, on the seventh floor of the landmark Manhattan Loft Gardens skyscraper in Stratford.

In November, chef and restaurateur Richard Corrigan teamed up with pub owner Tony Gibney, and another Irishman, John Nugent, chief executive of the hospitality group Green & Fortune, to open Daffodil Mulligan restaurant and bar in Shoreditch.

Cormac Gibney, who was assistant manager of Gibney’s in Malahide before taking on the manager role at Gibney's, London, an Irish bar beneath Daffodil Mulligan, makes the list for the first time.

The Corrigan family and senior staff at Corrigan Group restaurants make numerous appearances on the list. Chef and restaurateur Richard Corrigan is joined by his son Richie, who returned from working in Hong Kong to take up the position of manager at Daffodil Mulligan. His daughter Jess makes the media list, as co-founder of Crab Communications. Fiona Hannon, head chef at Bentley’s and Aidan McGee, head chef at Corrigan’s of Mayfair, also feature.

Two groups of sisters, working together in food businesses, also make the list. Siobhan Peyton, who co-founded Peyton & Byrne with her brother Oliver Peyton, has joined forces with her sisters Marie and Caitriona Peyton. The trio set up Roastery + Toastery, a cafe serving toasted sandwiches and speciality coffee in Camden.

Aoife and Johanna Ledwidge launched J+A Cafe in Clerkenwell in 2008, serving Irish home cooking favourites such as soda bread and chocolate Guinness cake. According to Hot Dinners they are also working this year with their brother JP on Cabü by the Lakes, a development of log cabins, lakeshore houses, a restaurant, bar and lifestyle store, in Killykeen Forest in Cavan.