Food File: Ballycotton food scene hots up; take time for a tea class on Sundays, and a new low-sugar range of Irish cakes 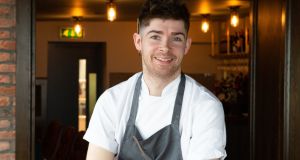 It’s all go on the culinary scene in Ballycotton, Co Cork, with two new restaurants opening in the village. Former Euro-toques young chef of the year finalist Dan Guerin has returned to the place where he was born to head up the kitchen at Cush, a restaurant, bar and guesthouse on the waterfront.

Next week, Sea Church restaurant is due to open at the village’s St Colman’s Church, which has been transformed into a music and events venue. The restaurant is in the school house adjoining the church and the two are connected by a glass atrium. Owen Davidson, who is executive chef of The Emporium Company, which has pubs in Castlemartyr, Glanmire, Ballincollig and Midleton, is running the kitchen.

Cush is a 40-seater open for dinner Thursday to Sunday, with lunch on Saturday and Sunday. Guerin has previously worked at Sage in Midleton and Campagne in Kilkenny. His launch menu includes a starter of warm natural smoked haddock, potato velouté and crispy egg, and a main course of roast rump of lamb with harissa spiced shoulder pastilla.

Sea Church can seat 82 diners (the music venue has a capacity for 120, and is open for lunch and dinner all week, with breakfast a weekend addition. Lunch is a something-for-everyone selection of soups, sandwiches, salads, pizzas, burgers and fish and chips. The evening menu is more extensive, but similarly broad in its appeal and will be served until 9pm.

Both Cush and Sea Church are owned by local entrepreneur Pearse Flynn. See cush.ie and seachurch.ie.

Definitely not in the bag

There is more to the art of making and taking tea than dunking a bag in a mug, and Sundays at Stores is a great way to learn more. Dairine Keogh and Simon Cummins’s South William Street temple of tea (and coffee too), Clement & Pekoe, has expanded northside.

Clement & Pekoe Stores, on Blessington Street in Dublin 7, is where they do their production and processing, and there is a cafe there too. On selected Sundays you can join them for a two-hour introduction to different types of tea, learn a bit about the history of tea, and how to brew the perfect cup.

The Sundays at Stores classes will be on March 8th, 22nd and April 5th (2pm-4pm), and tickets, €50, can be purchased at clementandpekoe.com.

Pure Treats is a new low-sugar range of Irish cakes created by Robert and Denise Hallam from Co Dublin. The siblings began researching natural sugar replacements when Robert was advised to remove it from his diet a decade ago.

The range uses xylitol, a natural sweetener obtained from birch trees, which reduces the amount of sugar in each 60g cake to less than half a teaspoonful.

There are three varieties of mini cakes in the range – chocolate chip, lemon drizzle and berry burst (a bronze winner at the Blas na hÉireann food awards). They cost €2.99 for a box of two individually wrapped cakes, from Dunnes Stores, SuperValu and Avoca as well as independents.