Michael Caines: ‘You’re hanging upside down and you see a hand, lying there, and your arm’s gone’ 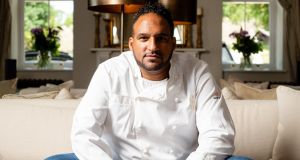 Chef and hotelier Michael Caines in the drawing room at Lympstone Manor, his hotel and restaurant on the south Devon coast.

“I fell asleep at the wheel. I woke up on impact and I realised instantly what had happened. I remember it very graphically. It was a nightmare . . . you’re hanging upside down in a car and you see a hand, lying there, and you look over and you see your arm’s gone.”

Michael Caines, the Michelin-starred chef and hotelier, is talking about the road traffic accident 25 years ago that could have cost him his career, perhaps even his life. It happened when he was driving back from his niece’s christening, having just taken on the job of head chef at Gidleigh Park, a luxury country house and restaurant in Devon. For the high-achieving 25-year-old newly in charge of a kitchen with a Michelin star that he desperately wanted to retain, life would never be the same again.

“Initially I wanted to give up. Then you think, okay, there are reasons to want to survive. That didn’t define me as a one-armed chef, it gave me a challenge which I overcame, and it shows anything is possible, if you put your mind to it.”

Key to opening his mind to possibilities at that tough time was a gesture by his father, who set up an easel and told him to try sketching with his left hand.

“I really enjoyed art as a kid and I realised that I just had to learn how to use my left hand,” he says.

Caines was back at work part-time within two weeks, and full-time within a month. Right-handed before the incident, he now has a state-of-the-art prosthesis and says that there is little he cannot do in the kitchen.

Irish chef James Sheridan, who worked with Caines at Gidleigh Park, says: “The skill he possesses in his one arm is simply extraordinary. It was an inspiring sight, seeing him roll bread or make perfect raviolis . . . after two weeks in his kitchen, you completely forgot about his disability.”

Five years down the line, Caines won a second Michelin star at Gidleigh Park, where he worked for more than 20 years, while also carving out a career as a hospitality consultant and media personality, appearing on many food programmes, including Great British Menu. In 2006, he was made a Member of the Order of the British Empire (MBE).

These days, you’ll find him at Lympstone Manor, a 21-bedroom country house hotel and restaurant in a Grade II listed Georgian building, set in 11 hectares (28 acres) overlooking the Exe estuary, between Exeter and Exmouth. It is his home turf, he tells me, and he was keen to stay in the region when he took the decision to leave Gidleigh Park in January 2016. “I wanted to go and create and own something for myself, ” he says.

He grew up in Exeter, the youngest of six children, adopted as a baby by Pat and Peter Caines. His birth mother was a Londoner and his birth father from the West Indies. He traced and met both parents later in life, and discovered he had a half-sister too.

Caines began his catering studies at Exeter College, where he graduated as student of the year in 1987, and where the Michael Caines Academy now offers school leavers a chance to pursue careers in hospitality. There is a posse from the college doing a tour of the hotel as Caines and I speak, eyes swivelling as they take in the hotel’s beautiful and lavish public rooms, its extensive and constantly changing artwork collection, and three exquisite dining rooms, and see just what is possible in their chosen field, with hard work and determination.

“When I found Courtlands Mansion, as it was called, instantly I could see its potential, but it was very run down and needed some . . .we call it TLC, Tender Loving Caines,” he says, hinting at just how hands-on he was with the 18-month restoration project. “All of what you see now is a product of my own determination and imagination.”

Lympstone Manor opened for business in April 2017, its restaurant earning a Michelin star within six months. The venture has cost “around £10 million, of which £5.5 million was spent on the building itself,” and there are investors involved as well as Caines’s own cash. He describes it as his “vision of contemporary country house hospitality for the 21st century”. The grounds include an 11-acre vineyard, planted last year, that will produce English sparkling wine, and a sculpture park is due to open next month.

Despite the grandeur – my suite has a giant bathroom with a pair of matching copper baths, side by side and anchored by a table on which rests a Champagne bucket – Lympstone feels homely and hospitable, from the relaxed and warm welcome, to the guests’ pantry, where a cake appears as if by magic each afternoon at tea time.

It is a trait shared by Ballyfin Demesne in Co Laois, where Caines will be cooking for one night next month. Ballyfin’s general manager Damien Bastiat and head chef Sam Moody both worked at Gidleigh Park, and their collaboration with their former boss sold out within 24 hours of going on sale. Such was the strength of the response that a second date will follow next January.

Caines says he is looking forward to turning the six-course tasting menu he and Moody will cook into “a celebration of Irish food”. They will be responsible for three courses each on a menu that “will showcase the best of Irish ingredients and also our style of cooking”.

He describes his style as modern European cuisine, classically-based but contemporary. “They say you see a lot of the character of a chef through the food they cook and in that regard I like to think that we’re cooking great food, with great technique, getting wonderful flavours .”

He seems surprised when I ask if he still cooks, with all his other responsibilities at Lympstone Manor. “On God yes, I am here in the kitchen every day, other than Sunday. I’m very busy in the kitchen, our business is too small to just walk around and do nothing.

“You’re only as good as your last meal. I didn’t create Lympstone Manor as a platform for someone else to come in and cook . . . I have a unique talent, I’m a great cook. That’s why I come in, six days a week, with a chef’s jacket on.”

How his accident changed him
It made me a better person in many ways, and it made me realise that resilience and perseverance are important. I could have lost my life that day and I didn’t, so it gave me purpose and meaning. Life’s too short, so why waste a day.

How his business is performing
We had a very successful first full year and we are on track to achieving all of our goals. We made money in the first year – lots of people don’t do that.

Women in professional kitchens
I don’t look at a woman and see inferiority, I see someone that can contribute, that has a lot to offer and balances out the workplace beautifully.

Being one of only two black Michelin-starred chefs (according to the Guardian, 2018)
Minority is just that; we are a minority, so proportionately we are always going to be slightly less represented.

His Brexit concerns
I am a keen remainer and I think one day we’ll look back and think, what on Earth was all that about?

Being a business owner
This building was created by a very wealthy banking family [the Barings] that built its money on slavery and trading goods, and I am the son of a descendant of slavery, and now I own it. That’s what I love about the world – opportunity for everybody, irrespective of background.