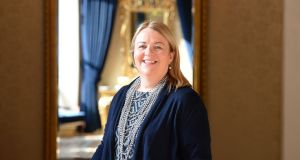 GMIT’s Cáit Noone: ‘Sometimes I will have a parent say to me, ‘I did that job and I’m not having her [or him] do it, and I always think, what a missed opportunity, because this is a career where you will never be unemployed.’ Photograph: Alan Betson

What do you do when the industry you represent, and the third-level courses you are delivering, are attracting dwindling numbers of new entrants? It is a concern shared by Cáit Noone, former head of the Galway international hotel school at Galway Mayo Institute of Technology (she is now vice-president for international and engagement at the college), and Annette Sweeney, co-ordinator of the culinary arts programmes at TU Dublin Tallaght Campus.

“Sometimes I will have a parent say to me, ‘I did that job and I’m not having her [or him] do it, and I always think, what a missed opportunity, because this is a career where you will never be unemployed,” says Noone, whose own career path has taken her to the United Kingdom, Switzerland and China, where she was dean of the first international hotel school there.

Sweeney, who teaches the next generation of chefs, believes that negative publicity about long hours and kitchens being hostile working environments, may be putting young people off working in professional kitchens. But she points to the work being done by Chef Network, an Irish professional group, and its Kitchen Workplace Charter, an opt-in commitment to making kitchens safer, more inclusive and more progressive places to work.

“It is early days, it was only launched in November but it is filtering through,” she says. “I say to our students, the chefs behind this are the ones you want to be mentored by. We will steer our students towards those places. We would always encourage our students to work in places where they are respected and treated properly.”

The gender balance among hospitality and culinary arts students tends to be equally split, both women say. But fast forward a few years, and there are fewer women than men still involved in either career, and fewer still making the headlines for high achievement.

This is not a recent phenomenon. Recalling her early days as a hotel receptionist, Noone says, “I liked the industry but I found aspects of it quite difficult. In the late 1980s in Ireland, the industry was very male dominated at managerial level and I didn’t see many opportunities available for young women to progress their careers.”

Her response was to continue her studies in the UK, and to diverge into third-level education in the hospitality sector. “I discovered very quickly that this is what I love doing,” she says. After a spell on the academic staff at the prestigious Les Roches hotel school in Switzerland, Noone brought the brand to China, in a joint venture with the Chinese government. “It was a fascinating opportunity to work in China,” she says.

But in 2004 , a devastating turn of events made her think about coming home. “I was really personally affected by the St Stephen’s Day tsunami when two of my colleagues who I had hired and brought to China to teach, died on Phi Phi island. Something changed within me after that . . . and I gained a different perspective on what I wanted to do.”

After taking some time out, Noone went back into industry for a while, before joining Galway Mayo Institute of Technology in 2007. She has filled a number of senior roles there and her current job involves significant responsibility around managing and leading the college’s strategic direction.

In Tallaght, Sweeney has been pushing boundaries too, putting in place an honours degree course in botanical cuisine (connecting culinary education with horticulture), as well as setting up a post-graduate MSc in applied culinary nutrition.

Experiential learning, also called discovery learning or problem-based learning, is Sweeney’s main teaching focus, and she says she has a reputation in the college for “being a bit whacky” in the kitchen and encouraging her students to experiment and learn through that process. “I can see what it does, and the learning that takes place. And I can see the joy in the students when they achieve something new.”

She and her colleague Denise Murray have also introduced a module on the mindful kitchen, which she describes as having a two-pronged approach. “It’s about being mindful of where food comes from, and what you are doing with it, how you are working in the kitchen, and about waste, not only that but dealing creatively with waste.”

It is also about equipping student chefs with strategies to cope with stress and making them aware of the importance of self-care. “We want to make sure they know the importance of eating properly, of taking their breaks, and what to do if there is a bullying situation, or a lack of respect. We are giving them the skills to say, ‘I am not accepting that’.”

Noone has some suggestions to make hospitality careers more attractive, and more accessible. “If I had to ask hoteliers of Ireland one thing, it would be to please stop having split shifts [very long working days punctuated by an afternoon break]. Look at how you are managing your business, and it may not be essential. When it is imposed on staff, I think it is problematic.”

She would also encourage employers to look positively on career breaks, particularly in relation to facilitate family life. “I think the industry actually benefits from people taking time out and coming back to it.”

For anyone contemplating a career in hotel management, she has the following advice: “When you work in this industry it’s not about meeting people’s expectations, it’s about exceeding them.”