Mairead McGuinness: ‘We know little about where the money we spend in supermarkets goes’

Retailers should be made to reveal their profit margins, says the MEP 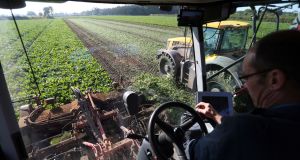 Last week the agriculture committee of the European Parliament backed a report outlining the consequences of unfair practices in the retail sector. The report proposes transparency to the food supply chain across the EU.

The report, written by Mairead McGuinness, the Fine Gael MEP and European Parliament vice-president, highlights the impact that unfair trading practices have had on farm incomes and on the sustainability of the food supply chain.

People who live in towns and cities might shrug when they hear talk of farm incomes, but the issue of food supply is relevant to everyone. All the big supermarkets in the Republic keep their profit margins closely guarded secrets, and the chains are often accused of exerting undue pricing pressure on producers.

“The problem is not unique to Ireland, and across the EU there is discontent and discomfort. A lot of work is being done on a European level on the issue of transparency and fairness,” McGuinness says. The work is likely to lead to a voluntary supply chain initiative that will see companies – including big supermarket chains doing business in the Republic – sign up to fair-trading principles.

The key word is “voluntary”. There have been repeated suggestions at home and across the EU that legislation is needed to end some of the worst excesses of avaricious retail chains, which critics say focus exclusively on profit.

McGuinness says that retailers should be made to reveal details of their profit margins. “They have no problem demanding that suppliers give them detailed breakdowns of their input costs. Ultimately it comes down to power, and the retailers have all the power.

“I don’t think it is easy to legislate for a fairer food supply chain, but it is still important to raise the issue and keep the political pressure on the retailers. We have so little knowledge of where the money we spend in supermarkets is going and how it is being divided up. Producers can say very little, because they need to keep their foot in the door. They can’t afford to be delisted,” McGuinness says, referring to retailers’ power to drop suppliers.

Arguably, though, considerable power still rests with consumers. They choose where to shop. McGuinness accepts that people will look for cheaper products but argues that looking for lower prices should not obscure the need for fairness.

“We need to think of the long-term consequences of a relentless pursuit of cheaper products. Ultimately, pressure on the supply chain will see producers going out of business and mean less choice for consumers.”