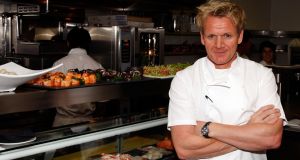 Gordon Ramsay has hit back against accusations of cultural appropriation at his new “authentic Asian” restaurant after an east Asian food writer described it as “a real life Ramsay kitchen nightmare”.

In a review of a preview event for Lucky Cat this week, the food writer Angela Hui said that she was “the only east Asian person in a room full of 30-40 journalists and chefs”.

In accompanying screengrabs of posts to Instagram, she said she could only “drink through the pain that this is an ‘Asian’ event” and characterised the restaurant’s approach as “Japanese? Chinese? It’s all Asian, who cares.”

[The Irish Times asks: What's the difference between food evolution and food appropriation?]

At the event, according to Hui, Ramsay said the head chef, Ben Orpwood, was “way more qualified and experienced than me in this field” by dint of having researched and travelled to south Asia for “many months”.

In response Ramsay said that “despite the very positive feedback from guests” there was “one offensive response from the night, which I have to call out”. He accused Hui of being derogatory and offensive, saying she lacked professionalism and integrity. He said that one post on Hui’s feed referred to Orpwood’s wife as a “token Asian wife” and was “personal and hugely disrespectful”.

Ramsay’s strongly worded response, which drew further criticism from some observers as being dismissive of an Asian critic’s perspective on a restaurant billed as an “authentic Asian eating house”, is the latest in a series of controversies over cultural appropriation in food. A number of British restaurants and brands have been accused of seizing on other cuisines and misrepresenting or stereotyping them.

Original promotional materials for Lucky Cat said the restaurant would be an “authentic Asian eating house and vibrant late-night lounge, inspired by the drinking dens of 1930s Tokyo and the far east”.

In an apparent reference to the Japanese maneki-neko figurine, it said: “In keeping with the authenticity of the concept, the restaurant’s name takes inspiration from Asian culture where the ‘lucky cat’ is a talisman that is believed to attract good luck and fortune.”

Responding further to Hui’s criticism, Ramsay wrote on Instagram that the preview night was “a warm, buzzing and brilliant night to celebrate what has been a long-time vision for me”.

He said: “Gordon Ramsay Restaurants do not discriminate based on gender, race or beliefs and we don’t expect anyone else to.

“Critics and reviewers have an important job to do, and it’s important that they are independent and have freedom of speech. However, the slew of derogatory and offensive social media posts that appeared on Angela Hui’s social channels, were not professional.”

Responding to Hui’s review, the chef and restaurateur George Chen tweeted: “Is the famous chef going to curse at his white cooks in Asian or what? Every chef has a right to interpret another cuisine but the integrity and culture (read authenticity –albeit I hate that term) needs to be studied in depth and not whitewashed for marketing purposes.”

Chen also highlighted the naming of a cocktail at the restaurant “Lucky Geisha”, saying it was “Charlie Chan stereotypes all over again”.

Chef Ken Hom commented to the Guardian: “I wish Gordon the best and wish him much success. Perhaps I can be of help as consultant? I do have 59 years of experience in Asian cuisine.”

Lucky Cat is not the only restaurant to have been accused of cultural appropriation in recent weeks. Lucky Lee’s, a restaurant in New York run by a Jewish-American couple, was criticised for claiming to serve “clean Chinese food” that wouldn’t make people feel “bloated and icky the next day”.

The establishment was forced to issue a statement saying that they had not been commenting negatively on Chinese food and that it was “incredibly diverse and comes in many different flavours (usually delicious in our opinion) and health benefits”.

Ramsay came in for similar criticism last year with the announcement of his new National Geographic series Uncharted. The network said the programme would see Ramsay “tested against the locals, pitting his own interpretations of regional dishes against the tried-and-true classics”.

The chef Eddie Huang said of the show: “Ramsay now wants to parachute into foreign food cultures and show the locals he can cook their cuisines better than they can.”

National Geographic responded by saying the criticism was premature as the series hadn’t even gone into production yet. “[Our] plan with this series is to celebrate and learn about local cultures around the world. In partnering with Ramsay – a well-known adventure enthusiast – we are going to fully immerse viewers and give them a glimpse into surprising and unexpected cultures and local flavours.” – Guardian.