Food File: Try afternoon tea with a twist in Cork and Dublin, and taste the cream of whiskey 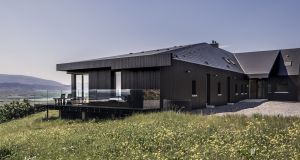 Dates have been released for the autumn series of food experiences at Breac House in Dunfanaghy, Co Donegal. Cathrine Burke and Niall Campbell’s award-winning guest house will once again play host to local man Ciaran Sweeney, head chef at Forest & Marcy in Dublin, and will also welcome Tony Davidson and Lina Reppert from Fisk in Downings.

Sweeney will serve a locally sourced seasonal menu, and Davidson and Reppert will offer guests a series of small plates celebrating local fish and shellfish. There will be pre-dinner drinks, and both dinners will be accompanied by wine pairings and are part of a two-night B&B package, with dinner one night and a picnic backpack for lunch.

Sweeney’s dates – September 8th-10th (Sunday to Tuesday, with the tasting menu on the Monday), and September 10th-12th (Tuesday to Thursday, with the dinner on the 10th) – sold out in a day of their release, but you can join a cancellation list by emailing hello@breac.house.

Davidson and Reppert opened Fisk, which is described as “a contemporary fish bar”, in spring 2018. The Fisk dates are October 13th-15th and 20th-22nd, and bookings can be made online at breac.house. The cost is €750 per room (two guests).

Jenny Gleeson took redundancy from a career in the corporate world to pursue her love of baking and cake-making, and now makes dramatic creations for weddings, christenings, birthdays and special occasions.

One thing that sets her cakes apart, is that they are decorated with buttercream rather than fondant icing, which offers more creative possibilities, but frankly isn’t that nice to eat.

Gleeson makes her own sponges, fruit purees, lemon curd and salted caramel, as well as macarons and meringues for decoration. Her cakes start at €245, for one that will serve 30 people. Orders can be placed on sweetiepiedublin@gmail.com or 087-4129118.

The cream of Irish whiskey

Five Farms single-batch Irish Cream Liqueur is made in Co Cork with cream from five family-owned farms, hence the name. The cream, from grass-fed cows, is blended with 10 per cent triple-distilled Irish whiskey within 48 hours of collection. It went on sale in SuperValu this week and costs €34.95.

The liqueur is cleverly and innovatively packaged in a heavy, dark ceramic bottle, reminiscent of an old-fashioned milk bottle with a clip top. Five Farms is a joint US-Irish venture between McCormick Distilling Company in Weston, Missouri, and Johnny Harte, a co-founder of the brand.

The popularity of afternoon tea never seems to wane, and new spins on the concept have recently been launched by the River Lee Hotel in Cork and the Conrad hotel in Dublin.

The River Lee’s Slice of the City afternoon tea is served daily, between noon and 5pm, in the hotel’s recently refurbished cocktail bar. It costs €30 per person and features ingredients from the locality, such as Quigley’s spiced beef, Glenilen Farm cream cheese and Ballycotton crab. City landmarks such as the English Market and St Fin Barre’s Cathedral are reproduced on chocolate transfers to decorate some of the cakes and desserts.

In the Conrad’s Team Time at Lemuels, there is an interactive element to the experience that begins with newly appointed tea sommelier Shameerah Corrigan explaining the origin and concept behind each of the nine elements on offer, three savoury and six sweet. The cost is €30 per person.