This pudding is wonderful made with lemons, but might be even better with Seville oranges 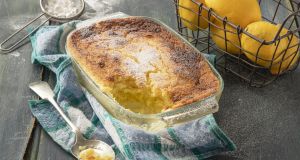 In the unlikely event there is any pudding left over, it can be served cold. Photograph: Harry Weir Photography

The baking dish is filled with the most unpromising, slightly curdled-looking mixture. Less than an hour later, it emerges from the oven as a feather-light sponge with a secret layer of tangy lemon curd-style sauce at the base. Served with a pool of cold pouring cream, it is nigh-on impossible to resist going back for seconds of this one.

The depth of winter is when I appreciate citrus fruits the most. From clementines in December, to Seville oranges in January, and fat Amalfi Coast lemons in February, they bring a zing and freshness that can be missing from winter cooking in more northern climes.

The colourful Spanish and Italian citrus fruits, with their glossy green leaves still attached, brighten up the greengrocers’ shelves like nothing else. If you can source some Seville oranges during their fleetingly short season, don’t just save them for marmalade. Sevilles are aromatic and have a bitterness that sets them apart from other oranges.

This pudding is wonderful made with lemons, but might be even better with Sevilles. They’re too sour and full of pips to eat as a dessert fruit, but they freeze well and can be used in everything from cakes to salad dressings.

This pudding is baked in a bain-marie, or water bath, so you will need a deep roasting tin and a deep ovenproof dish that will fit inside it. The hot water insulates the edges of the pudding from the direct oven heat, so that it cooks through gently and evenly, and forms the all-important lemon sauce at the base, rather than crisping up at the edges.

In the unlikely event there is any pudding left over, it can be served cold. The lemon sauce firms up into a spoonable curd, and is irresistible with a dollop of softly whipped cream on the side.

100g softened unsalted butter, plus extra for greasing the dish

To serve: icing sugar and cream

1 Pre-heat an oven to 180 degrees Celsius, fan, or equivalent. Boil a full kettle of water. Generously butter a deep 22-centimetre diameter ovenproof dish with a capacity of around 1.5 litres.

2 Put the butter, sugar and zest of the lemons into a food processor and process until well combined, or cream them together with a wooden spoon.

3 Add the egg yolks one at a time, mixing well after each addition.

4 Mix in a tablespoon of flour followed by a glug each of milk and lemon juice. Repeat until all the flour, milk and juice is incorporated.

5 In a separate, spotlessly clean bowl, whisk the egg whites until they form soft peaks when you lift the whisk. Fold the egg whites gently into the cake batter.

6 Pour the mixture into the buttered ovenproof dish and put the dish into a deep roasting tin. Pour hot water into the roasting tin so that it comes about a third of the way up the side of the cake dish. Carefully put the tin with its dish into the oven and bake for around 40-45 minutes, until the top is golden and springs back when pressed gently. Be aware of the hot steam when opening the oven.

7 Leave the pudding to settle for 10 minutes then either eat hot for maximum lightness, or cold – either way with plenty of cream. Serve dusted with icing sugar.

Variation
To make an orange surprise pudding, replace the lemon juice and zest with the zest of three oranges and zest of one lemon and 100ml of orange juice.