’Ohana, on Harcourt Street in Dublin, combines a tropical look with plenty of rum 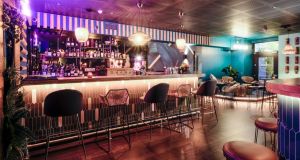 ’Ohana tiki bar is in the basement of 17 Harcourt Street, in Dublin 2

“I’ve been waiting years for the spike in demand. Every drink has a cycle.” Doug Leddin is talking about a shift towards rum. Vodka, whiskey and gin have all had their runs in the sun, and he believes rum’s time has come.

So on Friday Ireland’s first tiki bar, ’Ohana, opens on Harcourt Street in Dublin, named after a line from Lilo & Stitch – “Ohana means family” – and family, Leddin goes on, means everything.

Walking into a Georgian basement on a cold January afternoon is not the expected preamble to a tropical haven, but escape from reality is what they’re after, picking up on an international trend for tiki venues, a take on US rum bars from the 1930s that were lit with tiki torches.

This bar is a million miles from understatement: a vibrant, kitsch, romanticised mishmash of tropical themes, from Caribbean pirates to Pacific islands. The building’s original layout has morphed into four lush, darkened rooms – seating for 100, capacity for 200 – whose teal and crystal-blue walls are broken by sections of bespoke wallpaper of oversized palm leaves.

There are rattan and bamboo chairs, leather seats, shiny gold highlights, foliage and neon signs (“for Insta”). Outside is a small smoking area with a fake-grass floor and more bamboo. The tiles on the bar and DJ booth pick up the bamboo theme, and there are Easter Island-inspired sculptures, a wall of Polynesian face masks, and gorgeous octopus candlesticks. There are also distinctly untropical retro radiators.

Lanterns dot the atmospheric Cove area, a former vault – its huge steel doors are now part of the decor – with an arched brick ceiling and a backlit glass cabinet housing the most expensive bottle in the house: 500ml of limited-edition Bacardi rum, marking the company’s 150th birthday. It’ll sell for €350 a glass.

Eye-wateringly-priced novelties aside, ’Ohana will stock more than 300 rums, starting at €5.50, with many around €8 or €9, as well as whiskeys, vodkas, gins, wines and craft beers (plus discreetly hidden taps for more pedestrian brands of draught).

The bar is starting with about eight cocktails (€11-€15); the house rum is Chai, from Trinidad, where Leddin is an investor. (In a bamboozling twist, he says they plan to finish and bottle Chai Rum in Mayo from 2022.)

The serving receptacles, an eclectic collection of hand-decorated tiki mugs, bring a smile, depicting a monkey’s head, a skull, a half-peeled banana and, on a sharing mug, a treasure chest. There are also glasses (bespoke, from Greece, Italy and the US).

Third Mind Design and BHA did the over-the-top refurb – the interior design alone cost €100,000. The basement was a disused office when Leddin, who has a hospitality marketing background, and Ian Redmond, who owns Tramline, on D’Olier Street, took out a management lease.

Leddin; ’Ohana’s general manager, Will Lynch; and its cocktail creator, Paddy Noir, will run the bar with a team of 10. The profiles of the bar’s Instagram followers – it has 4,492 after six weeks – indicate most interest from 25- to 34-year-olds (followed first by 35- to 44-year-olds and then by 18- to 24-year-olds), with 57 per cent of them women. Yet to come: a YouTube cocktail-making channel.

“We’re trying to do everything differently, but we’re not taking ourselves too seriously,” they say. At the same time, Leddin adds, “We’re aiming to be one of the best bars in the world.” More attainably, “We want to make people happy,” says Lynch.

10 Michael Harding: ‘Thank you for your love,’ I wrote to a friend. Then I tore it up