It’s the most eagerly anticipated sandwich of the year. Here’s how to make yours epic

There’s more to the Christmas sandwich than turkey and ham, as these expert makers explain 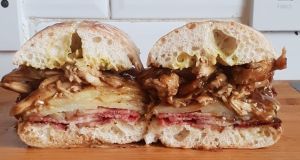 For all the reverence Christmas dinner receives, it’s the food of Christmas night and St Stephen’s Day – the leftovers and, more specifically, the Christmas sandwich – that I want to heap adoration on. This sandwich is unlike any other, thanks to the availability of delicious morsels picked from the fridge when it’s at its most bountiful – full of excessive leftovers from festive feasting.

These are not sandwiches made for dainty display or to look pretty for Instagram likes. These are glorious beasts, piled high, salubriously stuffed and eaten in pyjamas. If there are leftover rashers from the turkey, in they go. The crispy bits from the roast potatoes? Bonus layer. I’m even partial to the made-famous-by-Friends “moist maker” – a slice of gravy-soaked bread in the centre.

These are magnificent structures, heavy with roast meats, sauces and even the Christmas-food polariser, Brussels sprouts

Marcus O’Laoire, DJ and sandwich aficionado, rates this festive feed so much he has created a year-round version for his new mobile sandwich venture, the Sambo Ambo. He’ll adapt the proteins during the year using other roast meats but it’s the turkey-and-ham version he most looks forward to. “There are many versions of a perfect Christmas pedalled to us. Snow softly falling, sleigh bells ringing but let me say unequivocally that none of this is relevant or even matters without a proper Christmas sandwich.” And his decadent addition of a layer of dauphinois potatoes is genius.

The Christmas sandwich has in recent years been adopted as a December deli staple although often the bought versions pale in comparison to home-made. Not so at 147 Deli, where chef Barry Stephens’s offerings are nothing like the flaccid cranberry, turkey and Brie prepacked attempts. His are serious contenders, magnificent structures, heavy with roast meats, sauces and even the Christmas food polariser, Brussels sprouts.

Fail to prepare, prepare to fail Six of you for Christmas? Cook for eight. That should give you at least a couple of days worth of sandwiches.

Trimmings are essential As Holly Dalton advises: “For the classic turkey and stuffing sandwich, I have to have gravy on the side for dipping . . . And no matter what, make stuffing. I think stuffing is the cornerstone of the Christmas sandwich.”

Consider your bread White pan is a popular choice because of its ability to mould around the ingredients and it stays soft and fresh for days, which I’ll admit is worrying any other time. Batch bread is a great option too.

Condiments for the win Have plenty of good cranberry sauce. Mayonnaise is a vital ingredient and Asian Kewpie mayonnaise is my usual go-to but this year I’m seeking out Galway-made Builín Blasta’s smoked onion mayonnaise.

What to drink? I’m partial to tea before noon or a nice Beaujolais thereafter. Rory Craig from Station to Station Wine agrees Beaujolais is a great match because of its “bright, lifted fruit and a little bit of confection on the palate”. But this year he tells me he’s looking forward to “trying a little bit of Trepat and new-wave, fruit-driven Rioja” with his. I think he may approve of Club orange then, which is another favourite pairing of mine for the sandwiches.

Crisps. Don’t forget the crisps. King, Tayto or the fancy Keogh’s Christmas flavours. Just make sure you have plenty.

Ingredients
1. Reheat your turkey in gravy.

5. Time to assemble. Spread mayonnaise on your bottom slice of ciabatta and crack a lot of black pepper on it. Then add the bacon.

6. Next, add a hot layer of dauphinois potatoes, then the turkey and gravy generously spooned on top of the gratin.

7. Spoon the vinaigrette on the top slice of ciabatta and add it to the beautiful pile.

2. For your sauce, mix good-quality cranberry sauce with a little bit of mayo, a squeeze of lemon and some cracked black pepper.

3. For the guts, layer your turkey, glazed ham, Brie and sliced Brussels sprouts which have been fried in bacon fat with hazelnuts and crispy bacon bits.

4. To finish, put this sucker in a hot oven until its nicely toasted.

5. In 147 we serve our Christmas sandwich with a side of our chicken wing gravy but a pint of stout (or glass of wine) to wash it down will do.