Is a veggie burger ever really a burger? Not according to some

When it’s a veggie one, according to the growing number of states across the US outlawing the use of words such as meat, sausage and beef on products not made from animals 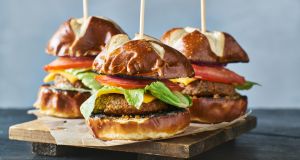 Tasty alternatives to beef. But are they burgers? The state of Arkansas says no. Photograph: iStock

Is a veggie burger actually a burger? More to the point, is it misleading to call it one?

By the end of this week, stores in Arkansas might not be able to call veggie burgers “veggie burgers”, or soy milk “soy milk”. That’s because a new law set to go into effect this week will prohibit what the state is calling misleading and confusing packaging on food items.

Advocates for the law say that people might buy a ‘veggie burger’ and be confused because it is not meat-based. Although the word ‘veggie’ does seem to offer a clue. The law would prohibit the use of terms like “meat”, “sausage”, and “beef” on products that are not made from animals, as well as prohibit the labelling of items like cauliflower rice as “rice” or soy milk as “milk”. It would be punishable by a fine of up to $1,000 for each violation. Similar laws have passed in states throughout the US including Missouri, Mississippi, Louisiana, and South Dakota.

Opponents of the law say it’s merely an attempt to protect the interests of traditional agricultural producers from the increasing popularity of alternative “meat” products which are enjoying a surge in popularity in the States.

Among the opponents of the law are Tofurkey, makers of a range of popular wheat-protein and soy-based products, and the American Civil Liberties Union (ACLU), who filed a lawsuit, alongside The Good Food Institute and the Animal Legal Defence Fund, on behalf of the company.

The ACLU and other opponents say the law is a blatant attempt to stifle competition in agriculturally driven states. In the complaint, they allege the law is “specifically designed to disadvantage purveyors of plant and cell-based meat”.

David Hillman, the legislator behind the bill freely admitted that his intent was in fact to “protect the agricultural producers in this state”. “You can’t sell a Chevy and call it a Cadillac,” Hillman said. But no one is actually confused when they see a product on the shelves called “veggie burger,” the ACLU argues. In fact people are seeking them out more than ever, whether it’s for health, environmental, or animal cruelty concerns.

Items like the Impossible Burger in particular have made significant inroads into restaurants throughout the country in recent years. “More and more, consumers are seeking out plant-based foods that can be produced without cruelty to animals or polluting our environment,” Stephen Wells, the Animal Legal Defence Fund Executive Director said in a statement. “But Arkansas’ lawmakers, kowtowing to the animal agriculture industry, have responded by enacting an unconstitutional law that makes truthful speech a crime.”

“When consumers choose plant-based foods, it is not because they are confused or misled, it is because they are savvy and educated about the health and environmental consequences of eating animal products,” Tofurky chief executive Jaime Athos said. – Guardian