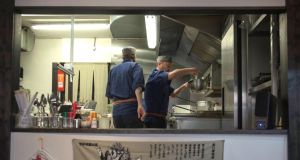 Miyazaki €
1a Evergreen Street, Ballyphehane, Cork; 021-4312716
People queue for a spot at one of the six seats in this tiny Japanese takeaway and restaurant serving some of the most astonishingly good food in Ireland. These days its owner and head chef, Takashi Miyazaki, is usually found at his Michelin-starred Japanese restaurant, Ichigo Ichie, so he has meticulously trained his team of chefs at Miyazaki, led by Mike McGrath, to re-create what makes his cooking so magical. Miyazaki’s lemon ramen has the power to replenish the weariest of hearts. AMcE

Lucky Tortoise Dumpling Company NEW
8 Aungier Street, Dublin 2
A pop-up for a long time, this tortoise set up a permanent home on Aungier Street recently. The menu is simple and full of flavoursome street-food favourites from Japanese, Korean and Chinese schools of cooking. It’s bring your own beer (they only have a wine licence) and down to Scoop for dessert, but this pared-back place is wildly popular. So make sure to book. CC

Rasam
18-19 Glasthule Road, Dún Laoghaire, Co Dublin; 01-2300600
The restaurateur Nisheeth Tak revolutionised Indian food in Dublin decades ago, bringing chefs to Ireland to wean us off the stock sauce approach that made every Indian meal taste the same. Rasam is still innovating and roasting and blending its own fresh spices and keeping the experience special, a place still teaching us about hospitality and delicious cooking. CC

3 Leaves
Blackrock Market, Blackrock, Co Dublin; 087-7691361
Santosh Thomas and his partner, Milie, are a great food couple. He’s a chef who thinks about what’s shifting and changing in the seasons, she has spoken about the joy she gets from balancing her work as a cancer nurse with working front of house. There is lots of thought here about how the world around us influences how we feel and how delicious food can help us leave happier than when we arrived. CC

Kimchi Hophouse €
160 Parnell Street, Dublin 1; 01-8728318
Kyoung Hee Lee and her team have been bringing bibimbap and gochujang to Dublin city centre since 2006. Recently she, her manager, Mihui Ko, and her head chef, Seoungin Jung, redesigned the menu, introducing new dishes, such as K-popcorn prawn (and, yes, that is a nod to the K-pop phenomenon) and the sweet and spicy U-dong with fried kimchi, alongside old favourites such as their sushi and the classic bibimbap, which is still their bestseller. AMcE

Hang Dai €
20 Lower Camden Street, Dublin 2; 01-5458888
What do you get when you mix 1980s John Carpenter movies with Hong Kong subway decor and the facade of a Chinese takeaway? You get Hang Dai. The vibe that head chef Karl Whelan and front of house Will Dempsey go in for is Beijing-style roast Skeaghanore duck, salt-and-pepper-fried tofu doused in fermented chilli sauce, and superspecial noodles served in New York-style takeaway boxes. The restaurant features a sound system designed by the Irish sound architect Toby Hatchett, meaning you can always hear what your dinner date is saying while DJs spin vinyl from the booth. AMcE

Nightmarket
120 Ranelagh, Dublin 6; 01-5385200
The best Thai cooking has an addictive combination of hot, sweet, salt and sour. Lesser places dial up the sweetness, but Jutarat Suwankeeree is a cook who has been around the magic of this food since she was a girl. Great for groups of people since they’ve expanded upstairs, Nightmarket is a blast of freshness in this restaurant district. CC

Wa Cafe €
13 New Dock Street, Galway; 091-895850
Sushi is the speciality of Wa Cafe’s chef and owner, Yoshimi Hayakawa, who offers up some of the best you’ll find in Ireland. Gannet Fishmongers provides the produce while Hayakawa serves up the magic touch. AMcE

Vietnom € NEW
The Glimmer Man, 14 Stoneybatter, Dublin 7; 087-3207279
This flavour-bursting food truck at the back of the Glimmer Man Pub in Stoneybatter is serving some of Dublin’s best street food, with predominantly Vietnamese flavours and a bit of Mexican thrown into the mix. The cauliflower tostadas with peanut sauce, chillies and pickled onions are pilgrimage worthy, and the courgette fried rice with nuts, chillies, pickled onions, herbs and flower petals is the product of someone seriously au fait with flavour. LC

777 NEW
7 Castle House, 73-83 South Great George’s Street, Dublin 2; 01-4254052
The flavours at 777 are in a particularly good place right now. The head chef, Essa Fakhry, recently spent time in New York working in the kitchens of Cosme and Empellon, and came home with fire in his belly and a new slate of ideas, like the charred Iberico Secreto with poblano peppers, peaches and sour cream. This is food like the type you find in Mexico City – no relative to sad burrito chains or supermarket taco kits. The excellent margaritas are mandatory. LC

M&L Chinese Restaurant €
13-14 Cathedral Street, Dublin 1; 01-8748038
Ireland may not be bursting at the seams with authentic Chinese food, but M&L is a little corner of Sichuan off O’Connell Street. The green beans with garlic and chilli have started many people on the path to addiction, and the house-made dumplings with beef and pork, topped liberally with chilli oil, are noise-makingly good. With BYO at a bargain €6 per bottle, it has become one of the hospitality industry’s favourite hangouts. LC

Ananda NEW
Cinema Building, Dundrum Town Centre, Sandyford Road, Dublin 16; 01-2960099
Convincing a 24-year-old Karan Mittal to leave sunny San Francisco for rainy Dublin was the smartest move Ananda’s owners could have made. The former Indian Accent chef’s tasting menu is a journey through his childhood in Delhi, and after being invited to a preview of his latest creations I was back within a week for more. Lunch is a different beast from dinner, with a well-executed set menu catering to locals and shoppers, but in the evening Mittal comes alive, unleashing family recipes and original creations while weaving in the best of Irish produce. The intense black-lime sorbet, disarmingly simple plate of Indian breads with goat’s butter and eye-wateringly good dhal, and roast Roscommon goat leg with fermented rice pancakes and chutneys are all unmissable. LC

Shouk € NEW
40 Drumcondra Road Lower, Dublin 9; 01-5322114
Shouk makes people happy. From the home-made pitta warm from the pan to the almost indecently satisfying beef and lamb arayes, to the meze platter that always seems too generous, both in size and in sheer flavour, it’s hard to go back from Middle Eastern food this good. Which might explain why it’s so hard to get a table. The outside seating in the back is one of Dublin’s best-kept sunny-day secrets. LC