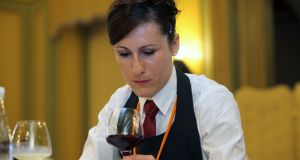 Irish sommelier Julie Dupouy has been named the third best sommelier in the world. One of just four women in the semi-final and the first ever to reach the final of the world championships, Dupouy was crowned by the Association de la Sommellerie Internationale at the final in Mendoza, Argentina earlier this week.

Dupouy, who was representing the Irish Guild of Sommeliers, works in the Greenhouse restaurant in Dublin as well as running an independent consultancy, DowntoWine. She is now also officially the best female sommelier in the world.

This is the most challenging and prestigious competition for sommeliers, held every three years, where contestants go through a series of rigorous tests, written and practical, that includes blind tastings, the serving of wine, spirits, beer and coffee, and matching drinks to various menus.

From 60 sommeliers all over the world, 15 go through to the semi-finals. From this elite group, three are selected for the final.

To reach the world championships, she first won Best sommelier in Ireland in 2015, while her previous accolades include being Ireland’s best sommelier in 2009 and 2012, and she was a semi-finalist in Best Sommelier in Europe 2013.

Originally from France, Dupouy has lived in Ireland for many years, and has previously worked as sommelier for Fallon and Byrne, The Residence Club and two-Michelin star Restaurant Patrick Guilbaud. She is married to Irishman Paul Young, manager at the Greenhouse. The overall winner of the competition was Sweden’s Arvid Rosengren.

‘As we raised a toast, there was no talk of lockdowns or the distance that separated us - just the four of us ‘together’ again’
7

Christmas dinner: Tips and shortcuts from the experts
9

Lockdown was hard, but it kept us closer to each other than we’ve ever been
Real news has value SUBSCRIBE