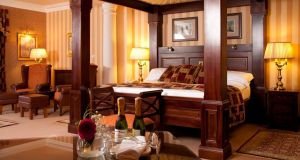 Harvey’s Point, on the shore of Lough Eske in Co Donegal, has been named the top hotel in Ireland, and the best for a romantic break, by contributors to the travel website TripAdvisor.

The hotel, which was run by Deirdre McGlone and Marc Gysling for 30 years, until they sold it, in March last year, to an investment fund, also features among the best in Europe in the 18th annual Travellers’ Choice awards, which are based on pre-pandemic travellers’ reviews published by the website in 2019. It finished in 12th place in the European rankings, and is among those noted for having the best service, coming 24th.

The Killarney Park, a five-star hotel on the outskirts of the Co Kerry town, took second place in the overall list of Ireland’s top hotels – but was voted best luxury hotel, ahead of Ashford Castle, in Cong, Co Mayo.

Heaton’s Guesthouse, in Dingle, Co Kerry, was named best small hotel in Ireland and also took second place in Europe (the list-topper was Anastasis Apartments, on the Greek island of Santorini) and seventh in the world in this category.

Castlewood House, next door to Heaton’s Guesthouse, and run by another branch of the Heaton family, topped the list for best service in Ireland; it was also listed 10th in Europe in this category.

Daly’s House, in Doolin, Co Clare, was named best-rated B&B in Ireland, and number 19 in the world.

The best fine-dining restaurant in Ireland, according to TripAdvisor users, is the Michelin-starred Chapter One, in Dublin. Frankie Mallon’s An Port Mór restaurant, in Westport, collected enough five-star reviews to edge into second place, ahead of Mulberry Garden in Dublin 4, recently reviewed in the Irish Times Magazine by Corinna Hardgrave.