Kitchen Cabinet: Despite goat meat being a staple in many countries, it’s seldom seen in Ireland 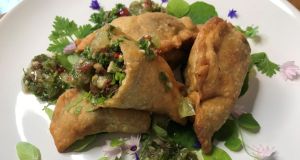 Despite goat meat being a staple in many countries, it’s seldom seen in butcher’s shops in Ireland, and I’ve never seen it in a supermarket. Luckily, it’s now available online from a few pioneering Irish goat meat producers, whose details I’ll share below.

I make empanadas at home a lot, sometimes with goat, sometimes cheese, sometimes black beans. They’re also occasionally on the menu in our food truck, which is popping up around west Cork this summer.

A few of my friends were reluctant to try goat meat, but I found that even they couldn’t resist something wrapped in pastry and deep-fried. Of course, you can egg wash and bake the empanadas, but this pastry really comes into its own when you dunk it in hot oil until golden.

There are three recipes here, and each can stand alone. This pastry is an absolute winner. When I worked in Deasy’s restaurant, we called it “The Best Pastry” in our kitchen book. The goat filling can be served alone with rice, and the gooseberry chimichurri can be drizzled on any meat or cheese.

Caitlin Ruth is a chef and food truck owner.

Method
1 Mix the flour, salt, and sugar in a bowl. Grate the cold butter into the flour, rub it through quickly with your fingers, then stir in the cold egg and the cold white wine just until it forms a cohesive dough. Wrap in parchment and chill until needed.

Method
1 Fry the goat meat in a few tablespoons of oil in a medium saucepan on high heat, until browned. Remove to a plate.

2 Saute the onions, chopped finely, until they’re cooked down and translucent.

3 Put the browned goat, the sliced chillies, the garlic, the cumin seed, the oregano and a few pinches of salt into the saucepan, stir around for a minute, then cover the goat meat with either water or chicken or lamb stock, if you have it, and simmer, covered, until very tender. This can take anywhere from an hour to two hours, depending on the age of the goat.

4 Uncover your saucepan and cook on low heat, stirring occasionally, until the liquid is mostly evaporated. Taste for salt, add more if needed, stir a big bunch of chopped oregano or coriander into the meat, and season with a squeeze of lemon juice. Let this cool, then refrigerate until needed.

Method
1 Top and tail the gooseberries, then roughly chop them on a board. Put into a bowl, top with the large pinch of sugar and stir.

2 Wash and finely chop the parsley, garlic and chillies. Put all into the bowl with the gooseberries, olive oil, vinegar, oregano and salt to taste. Stir and let sit until needed.

To shape and fry empanadas:

1 Roll out pastry on a floured surface until ½cm thick. Cut into 10cm rounds, roll each round out slightly a little more, so it’s nice and thin.

2 Brush egg wash onto one half of the pastry round.

3 Put a heaped dessert spoon of chilled meat filling onto the middle in an oval shape, and fold the pastry over the meat into a half moon shape.

4 Crimp the edges together and repeat with the remaining pastry and filling.

5 Deep fry at 180 degrees Celsius until golden brown, and keep them warm in a low oven until you are ready to serve.