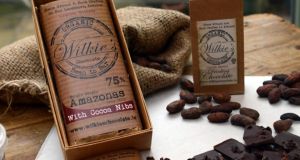 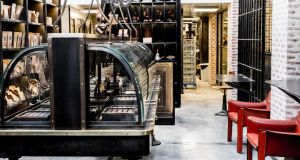 Bean-to-bar is big news in the chocolate world. The US has been leading the way as small artisans set about procuring cocoa beans, roasting and grinding them to their own specifications and making the raw material into smooth, complex bars of chocolate.

Last autumn the big boys joined in the fun when TV presenter Anthony Bourdain and chef Eric Ripert of Michelin-starred Le Bernardin in New York collaborated with Pennsylvania company Éclat Chocolate on a chocolate made with rare Peruvian Pure Nacional cocoa beans. The $18 bars sold out within weeks.

But, in a tiny laneway off a busy shopping street in Dún Laoghaire, Co Dublin, a former newspaper executive had beaten them to it. Shana Wilkie, a former manager with the Sunday Tribune , began making her organic single-origin Wilkie’s chocolate bars last June, and within weeks won the Best Organic Confectionery and Baked Goods category at the National Organic Awards.

Wilkie, who was born in the West Indies and traces her love for chocolate to her early days there, uses only organic materials and gets her cocoa beans from Peru. She works with a co-op there to source rare criollo beans. “These beans account for only two per cent of the world’s chocolate production,” she says. There are regional variations in the beans and each year’s harvest will have distinct differences in flavour.

There are giant sacks of raw cocoa beans piled in a corner of the production unit that is part of Wilkie’s Dún Laoghaire home. She goes to the airport herself to clear them through customs and bring them home, now in manageable – though still weighty – 20kg sacks (her first order arrived in 60kg sacks). Turning these piles of raw cocoa beans into a finished chocolate bar is a laborious process that begins with roasting small quantities of beans in a coffee roaster – a kilo at a time. As each batch of beans is different, Wilkie does this to determine how to get the best out of each consignment.

“I need to do up to 30 different tests to get the right profile for the beans, adjusting the roasting time and temperature; it’s very objective.”

The beans are then roasted in greater quantities in two domestic convection ovens, then cooled, shelled, stone-ground, and mixed with organic sugar and cocoa butter.

“I am one of less than 10 chocolate makers worldwide who use only cocoa beans, cocoa butter and sugar to make their chocolate,” Wilkie says. “I don’t use any emulsifiers, which makes the chocolate a little more difficult to work with but offers a much more natural product.”

When it has been worked or “conched” for sufficient time to make it smooth and glossy, the liquid chocolate is set in 4kg bars and allowed to age for a week or two to let the tannins develop.

It then goes into a tempering machine, a recent and expensive investment which allows Wilkie to speed up her process and increase her productivity.

“I got the machine from Italy in December, and it can do in four hours what would have taken me four or five days.” Tempering makes the chocolate darker, shinier and gives it the lovely snap when a piece is broken off a bar.

The chocolate is then poured into moulds, allowed to set, and finally wrapped by hand, a task Wilkie admits is very time consuming. A friend, Riona Holohan helps out, and between them the pair are now manufacturing 200 bars a week. Wilkie has set herself a target of securing six new retail outlets a week as well as developing her online retail market.

These are really excellent, long flavoured and complex chocolates that surprise and delight with each nibble. The 65g bars cost €4.95 each.

Wilkie also makes drinking chocolate with 55 per cent cocoa, which you can sample at the pop-up shop she runs in The Silver Moon cafe on Upper George’s Street in Dún Laoghaire on Sundays when the farmers’ market is held in The People’s Park.

Wilkie’s Organic Chocolate is available online and from retailers including The Organic Supermarket in Blackrock; Cavistons, Glasthule; Fixx Cafes, BrookLodge, Co Wicklow, and the Chocolate Shop in the English Market in Cork. For a full list of stockists and online shop, see wilkieschocolate.ie

Alain Ducasse has been working with chocolatier Nicolas Berger for more than 10 years, with Berger supplying the vast Ducasse empire of hotels and restaurants with their bespoke chocolates. Ducasse’s new Parisian project is a bean-to-bar chocolate factory, la Manufacture, and store (above) on rue de la Roquette off Place Bastille.

The beautiful, airy, open to the sky space, a converted garage, was three years in construction, and has a little courtyard where you are immediately hit by enticing chocolate smells. Inside, the long store displays the bonbons in the centre and the beautifully designed and packaged bars (there are 3kg versions!) line one wall whilst the other is transparent, allowing a view to the workshop and the chocolate-making process.

The two men sourced and adapted vintage machines to roast and conch on site, reteaching themselves the manufacturing process as they went along, creating a range of stunning bars, pralines and ganaches with finest beans such as Venezuelan Chuao or Peruvian Porcelana.

There are more than 40 varieties of chocolate, mixing filled bars with percentages and origins, fruity, smoky, robust almond pastes and pralines, and, my favourite, a coconut and passion fruit-filled dark chocolate
bar. For the moment, the beans are selected for the factory by a team of experts but soon Ducasse and Berger will also take over this part of the process. The process is focused on pure, fresh taste, though Ducasse’s prices are resolutely haute couture and not prêt à porter.