Yotam Ottolenghi: A breakfast crumble for early birds with a sweet tooth 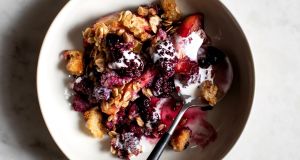 Years of close observation have taught me this: People are least adventurous in the morning. Even those who would normally thrust themselves into anything new are likely to stop at breakfast. “Oh, that looks great,” they say, “but not so early in the day.” It takes quite some time for our taste buds to wake up, it seems.

The transition from sleep to fully awake therefore needs to be eased into, perhaps with a comforting morning meal. What that looks like can be very different depending on where you are from. My French and Italian friends, on the minimalist end of the spectrum, are horrified by anything beyond a continental breakfast. A cup of coffee (and a flaky pastry, if one absolutely must) is as much as they can stomach in the early hours. Anything cooked, highly flavoured or rich gets a negative response.

Where I’ve travelled in Asia, on the other hand, the kind of comfort that sets you up for the day can be a full-blown meal, not dissimilar to what’s eaten at any other time. In different parts of India, I had rich dals and curries, served with rice or flatbreads that could be baked or deep-fried. In Thailand and Malaysia, things often kick off with intense savoury flavours: rice and noodles, often as porridge or soup, seasoned liberally with chile condiments and garlic, grilled meats and steamed Chinese-style savoury buns.

The Middle Eastern way is different, yet again. Generally speaking, there is not as much breakfast cooking going on. In Jerusalem, where I grew up, a popular morning spread included fresh vegetables, herbs, young cheese and yogurt, olives and flatbreads. Cooked egg, often an omelette, is the exception. And eggs, in general, seem to be the one player with a truly cross-cultural breakfast reach.

In my adopted culture, the full English breakfast consists of fried egg, grilled bacon, mushrooms, tomatoes and beans. I always found the beans puzzling in this context – too filling and too sweet – but their sweetness points to another major cultural variance on the breakfast table: sugar, either plain, or in some kind of syrupy form, or as fresh or cooked fruit.

It seems to me that for many, particularly in North America, it is that sweetness that has become the most customary form of breakfast. A stack of thick pancakes with maple syrup, a bowl of oatmeal or breakfast cereal with milk and a dusting or two of sugar, fresh or cooked fruit with yogurt, jam on buttered toast – all are expressions of the kind of comfort that sugar brings to the breakfast table.

During the recent lockdown, when I was often cooking three daily meals for my children, sweetness became the defining mark of breakfast in our house as well. French toast became the embodiment of both my children’s joy and my wish not to waste a thing. My eggy bread, as we call it in Britain, was the perfect kitchen raid, using up old bread, any fruit that had seen better days – quickly cooked with some sugar and vanilla and spooned over – and a pot of yogurt or cream lurking at the back of the fridge.

Over time, with natural evolution and deeper rummaging through cupboards, my variations on French toast moved farther and farther away from the austere concept of the continental breakfast. My pan-made berry and brown butter toast crumble sits happily somewhere between breakfast and dessert, holding on to some aspects of the original eggy bread – stale bread, burned butter and cooked fruit – while being its own deliciously rich thing. Not necessarily to everyone’s liking early in the day but, then again, you can easily hold off for a few hours and have it as brunch, once you are fully awake and feel brave enough to try something new.

1. Heat the oven to 200 degrees Celsius, or equivalent.

2. Add the apples, half the sugar, 2 tbsp/30g butter, ¾ tsp vanilla and ½ tsp star anise to a large, ovenproof pan or dish and stir to combine. Transfer to the oven to bake about 20 minutes, stirring halfway, until the apples have softened but still retain their shape.

3. While the apples are baking, add the remaining 7 tbsp/100g butter to a large frying pan over medium-high heat. Once melted, cook for about 4 minutes, swirling the pan often, until nicely browned and nutty, adjusting the temperature as needed to avoid burning. Transfer the browned butter to a large heatproof bowl and return the pan to the heat. Add the torn sourdough and cook, stirring often, for 2 minutes, until lightly toasted, then add to the bowl with the butter. Return the pan to the heat and add the oats and cook, stirring often, until lightly toasted, another 2 minutes. Add the oats to the bowl, along with the salt, remaining sugar and star anise, and stir to combine.

4. When the apples are ready, stir in the frozen berries plus 2 tbsp water, then top evenly with the bread mixture. Return to the oven, turning the heat down to 185 degrees Celsius, and bake for 30 minutes, or until golden and bubbling. Leave to cool and settle for about 5 to 10 minutes.

5. Add the cold cream and remaining ¾ tsp vanilla to a small bowl and stir to combine. Serve the crumble warm, with the cold cream to drizzle on top.