Beef is never just about steak or roasts. I love transforming different cuts with simple techniques 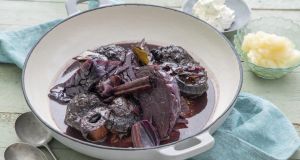 I have a farmer friend who I go out of my way not to disappoint. It’s just not worth the guilt. His whole body curls with a sense of betrayal. His tone and expression sucks at your very soul. It could be something as simple as not being able to meet him for a pint when you said you might, although those that know me know this doesn’t happen very often.

Some weeks back I wrote about a cauliflower. I felt I wanted to give a Christmas alternative. He sent me a text to say he was disappointed.

We met for a pint and discussed Cauliflowergate. He thinks I use too many vegetables. He was getting agitated. Hands were beginning to flap, his expression tightening. Although he is a metrosexual, disco-dancing farmer, he’s been working with the land and animals since he was 14.

He worries that as food gets cheaper, the farming community is being squeezed out, underappreciated, and that food has little value these days and the people who produce it are given even less value. Dungarvan is an agricultural town, we are surrounded by people who produce our food and we need to support them.

So this week my column is all about beef. It’s a tribute to the way I love to cook our stunning Irish beef. For me, it’s never just about steak or roasts. I love exploring different cuts, transforming them with simple techniques and sometimes unusual flavours.

I’m using beef shin here. It might be hard to get, but if you ask your butcher in advance I’m sure they would get it for you. Otherwise use chunky pieces of chuck.

The blackcurrant cordial deepens in the flavour, and it goes well with the cabbage. To serve the beef, I’m nicking the garnish of the glorious Austrian dish Tafelspitz, where apple and pungent horseradish are paired with the beef to delightful effect.

I wanted to make derivatives of this lovely dish, just in case you have leftovers. One is a pappardelle dish made with the slippery scrapings of the pan; the other a deeply flavoursome beef sandwich.

Method
1 Preheat an oven to 150 degrees Celsius, or equivalent.

2 Take a wide and deep pan and heat the oil until it’s gently smoking. Meanwhile dust the beef pieces in flour, season and shake off the excess.

3 Colour the beef on a medium-high heat. When it is brown on both sides carefully throw away the excess oil and leave the pan off the heat.

4 Return the beef to the pan and add the red cabbage.

5 Add all the rest of the ingredients, cover tightly with a lid or foil and bring to a simmer. Cook in the oven for two and a half hours, until the meat is soft and tender.

6 Strain off the juice and reduce it by half by simmering it in a pot on the hob and then pour it back over the beef.

7 For the apple sauce: Put all the ingredients into a pan and cook for 10 minutes over a medium heat until the apples turn into a deliciously lumpy purée. Serve warm or at room temperature.

8 For the horseradish cream: Whip the cream until slightly stiff then fold in the chives and horseradish.

9 Serve the beef and cabbage with the apple sauce and horseradish cream.

PAPPARDELLE OF BEEF AND RED CABBAGE

Serves three or four (depending on your leftovers)

Ingredients
1 packet of pappardelle pasta
Some juice, cabbage and beef from the previous night’s dinner; don’t worry if there’s very little meat, you will have the beefy juices
50g butter
Lots of grated Parmesan

Method
1 Cook the pasta as per packet instructions, then drain it and add the butter, cabbage, juice and beef leftovers.

4 If you have some horseradish cream left over, add a sneaky little dollop on top, along with lashings of Parmesan.

Method
1 Melt the butter in a pot and pour a little out to brush the outside of the bread.

2 Place the sliced onions in the butter and cook slowly with a lid over a low heat for 15 minutes.

3 Remove the lid, turn up the heat, add a pinch of sugar and cook until they turn golden. Add salt and pepper and reserve.

4 Fold any leftover beef into the onions.

5 Brush two slices of bread with the Dijon mustard, spread the onion and beef mix on top, followed by the cheese.

6 Sandwich with the other slices of bread. Brush with some of the remaining butter on the outside.

7 Place the sandwiches butter side down on a moderately heated frying pan. Then brush the top of the slices. Cook until golden, then flip over and brown and crisp the other side, making sure the filling is soft and gooey.