How to turn lettuce leaves into Little Gems

In Season: Green salads don’t have to be boring, here are three ways to make them epic 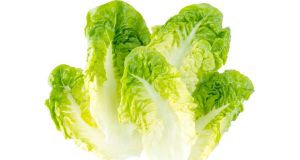 Lettuce doesn’t have to be eaten in a salad, it can be braised, grilled, stir-fried, used as a wrap, and juiced. Photograph: iStock

This is the time of year when lettuce consumption peaks; it’s also when we look for inspiration on how to use this ubiquitous vegetable. Apart from being torn or shredded and tossed in a dressing, it can be grilled, stir-fried, braised, juiced, and used as a cup or wrap to hold fillings.

Baby Gem, with its tightly packed, sturdy, sweet leaves, is one of the most versatile lettuces, and suitable for all of the above treatments.

At this time of year, I like to soften the white bulbs of some big, fat spring onions in butter, add petits pois, and finally stir through some shredded Baby Gem and allow it to wilt slightly. The resulting melange makes a tasty accompaniment for grilled fish or white meats.

Donal Skehan has a lovely recipe for griddled Baby Gem salad with toasted hazelnuts and Pecorino, in which the quartered heads of lettuce take on a smokey, charred flavour from contact with a griddle pan. There is creamy dressing drizzled over the top, with Worcestershire sauce, vinegar and minced garlic adding zing to the mayonnaises base.

Using Little Gem leaves to hold a minced meat filling is a trick that has been adopted by several cuisines. The leaves filled with pork mince marinated in soy sauce and sesame oil and fried with chopped bamboo shoots, water chestnuts, garlic and spring onions, becomes the Chinese dish, yuk sung.

Pork or chicken mince fried and mixed with ground toasted rice, ginger, garlic, chilli, fish sauce and fresh herbs, before being spooned into lettuce cups, is the warm salad called larb, from northern Thailand and Laos. You can try Lilly Higgins’s version here.

Food writer Felicity Cloake has taken the classic Caesar salad into another realm by grilling the lettuce (she uses Little Gem, same thing as Baby Gem, instead of the traditional Cos, and cuts it into wedges before grilling it).

“I’m loath to mess with an undisputed classic of the genre, which, frankly, has suffered enough (there’s a tofu kale Caesar online. Seriously), but I’d like to propose this as an adaptation. Lettuce is vastly enhanced by a little charring, a process that delivers yet another dollop of umami on top of the anchovy rich dressing. Add the fried bread and the bacon and it’s basically a salad for a very sophisticated hangover – hell, there’s even an egg yolk in there for good measure,” she writes in her book, The A-Z of Eating: A Flavour Map for the Adventurous Cook.

Lilly Higgins knows how popular quick recipes made with simple ingredients are, so you’ll also find her five-ingredient, two-step, Little Gem salad with Cashel Blue cheese dressing below. It has salami, too, tipping it into main course rather than starter or side dish territory.

And lastly, while researching which salad leaves to focus on for this In Season column, I stumbled on this – a veritable little gem – from Monty Don, writing in the Guardian in 2001. “I also grow Cavolo Nero as a summer salad crop, even though it is a winter cabbage. If you eat the leaves very young – just a few inches long – they are very tasty and good raw. Eat them raw when mature and you fart for a week.”

Method
1. For the dressing, put all the ingredients into a jar, cover it with a lid and shake until combined.

2. Place a large griddle pan over a high heat. Brush the lettuce halves with a little oil and season them. Place the lettuce halves onto the griddle and cook for about two minutes either side, until they have nice deep char marks, but still hold their shape. You can also barbecue them.

3. To serve, place the Baby Gem on a serving platter, drizzle with the dressing, scatter the hazelnuts on the lettuce and sprinkle the Pecorino shavings over the top.

Method
1. Crush the garlic and add to the oil. Leave to infuse for about an hour. Bash out the chicken until it’s nice and thin. Heat a griddle pan on a high flame and cook the bacon until crisp and well charred.

2. Tear the bread into bite-sized chunks and dunk in the oil, then griddle until crisp.

3. Cut the lettuces in half through the core, and brush with oil. Griddle until charred, then sprinkle with Parmesan. Set aside.

4. Brush the chicken with garlic oil and griddle on both sides until chargrilled and cooked through.

5. Mash the anchovies to a paste in a jug, then beat in the yolk, and gradually the rest of the garlic-infused oil until you have a thickish dressing. Stir in the lemon juice and taste – season if necessary.

6. Snip the bacon into small shards and cut the chicken into slices. Arrange the lettuce halves on a platter and scatter over the croutons, chicken and bacon. Drizzle with dressing to serve.

Method
1. Mash the blue cheese with the lemon juice and yogurt until smooth, adding a few sprigs of chives, finely snipped. You can use a fork to mash, or else a stick blender or Nutribullet. Taste for seasoning. You won’t need salt, as the cheese is salty enough. Add more yogurt or lemon juice to taste.

2. Thinly slice the salami and fry until crispy. Leave to cool slightly on paper towels. Quarter the lettuce and place two pieces on to each plate. Crumble over the crispy salami. Drizzle with the dressing and serve right away.

Dazzled by choice in a glamorous new Chinese restaurant