The Commons at Moli, Dublin: A new favourite from Domini and Peaches Kemp

Restaurant review: Beneath the city’s newest museum is a little cafe with a big personality 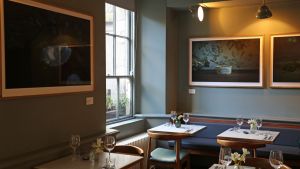 The Commons at Moli

I never owned anything posh enough to put on the handbag stools in the old Commons restaurant, that era when women dripped designer totes off pipe cleaner arms on to the low padded stools before tucking tidy knees under table cloths. Move over Manhattan, Dublin had arrived.

The Commons was more than a tiger bauble. It was a beautiful restaurant where young gun chef Aidan Byrne shook Irish restaurant cooking out of its buttery Frenchified straitjacket and landed a star. Lunch at a table overlooking the garden had a magic about it that Dublin restaurants have struggled to recreate ever since.

The Commons is a cracking piece of real estate, not least because of its garden and the monumental ash tree Joyce was photographed leaning against. The new Commons Cafe is in the basement of Dublin’s newest museum, the Museum of Literature in Ireland or Moli (pronounced Molly in a tip of the hat, maybe, to the glorious Mrs Bloom).

Leopold Bloom’s strolling flaneur-friendly city seems a quaint memory in the snarl of cars and sirens on the way here. So this quiet room with green walls and food photographs lit like medieval oil paintings feels like a sanctuary.

Tables are white marble and brass-bound with swirls of indelible circular marks on the marble as if time is already being measured out here in coffee cups.

I know and love the women behind the cafe, so there’s that interest declared. Domini and Peaches Kemp run a sisterhood of food enterprises: Itsa, Hatch and Sons, Feast Catering, Joe’s and Alchemy. You’d need a lie-down before lunch just to be them.

Across the table is a man who had his wedding breakfast here when it was the old Commons. He describes his range as “somewhere between Findus crispy pancakes and pan-fried wing of swan” which could well be the new tagline for this column, so I’m in good company.

A more margins-focused chain would have put together a sister menu to Hatch, their other museum cafe in the basement of The Little Museum of Dublin. But the Commons Cafe has its own personality and its own kitchen so there’s a different level happening here.

The two best dishes are the ones least likely to be ordered together, but I would urge you to find the third path between rip-roaring omnivore and concerned vegetarian (because that third path is by far the best way, folks). The first dish is the plate of roasted carrots. Juicy purple and yellow carrots, all the solar power of a growing season packed into one sweet tuber with nicely bitter radicchio leaves and a dukkah of hazelnuts and crispy dried oniony shards which add a second toastier bitterness to everything. It’s all bedded into a yoghurt-thick sauce and is properly delicious.

The ying to that yang is the beef tea. It’s made with spiced beef, which should spark memories for those who grew up with the real thing. The broth isn’t gloopy stew but a lighter version where the flavours of the meat sing clear. Good carrots have been stewed here too and the clincher is horseradish creme fraiche dolloped generously on top to slice through the spicy meaty sweetness with a light saber of fiery heat.

Burren smokehouse salmon is always good. And here it comes with fermented potato breads, which don’t taste much different to regular potato breads, and more of that horseradish creme fraiche, now my condiment of the season. The “Toonsbridge caviar” is (I think) a typo unless those west Cork herds have started producing some pretty strange milk. The orange flavour-pings are Mag Kirwan’s trout caviar from Goatsbridge. I could tut, but I like the idea of a typo in the cafe in a museum of writing.

Dessert is an apple and blackberry crumble with a silky jug of single cream and an Anzac cookie the size of a plate, coconut and oaty and chewy, with good coffee and tea. No handbag stools have been harmed in the making of this cafe. The bones of the building don’t need folderols. There’s deep style here.

The arbutus unedo tree out the back looks like a bonsai that’s been sprinkled with grow big dust. It flowers in December and gardeners joke it’s called unedo because you’ll only eat the fruit once. Unlike the cafe, which is now firmly on my shortlist of places round these parts. Like a fledging writer, the Commons Café is finding its voice, but it’s already feeling like a new city favourite.

Lunch for two with desserts and coffees came to €63.