How do you like them mussels? Donegal toddler goes viral

Lena Wilhare is a new Twitter star. Here’s how to get your children to vary their diet

Is baby Lena Wilhare's love of mussels proof that you can get children to eat anything? Video: Wilhare family 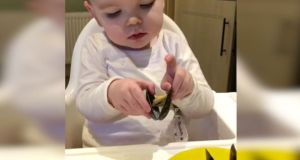 She may be blissfully unaware of the attention, but little Lena Wilhare has become something of a Twitter sensation. The 21-month-old from Donegal was captured on video not singing a song, doing a trick or even being cutely cheeky but simply being totally absorbed in eating her dinner.

And, apart from the fact that she is adorable, the reason more than 85,000 people have stopped to watch the 45-second clip in the past few days is because the toddler is happily munching her way through a pile of mussels – or ’ussels, as she calls them.

Her grandparents, along with her dad, Johnny, and uncle, Cahir, run Mulroy Bay Mussels, just outside Letterkenny, so it is hardly surprising that the young foodie is already enjoying a delicacy many adults have yet to acquire a taste for, but mum Helen says it’s all about giving her the same meals as her parents.

“Lena loves her food, and right from the moment she wakes up and asks for her porridge, she will happily eat whatever she is given,” Helen says. “We made a conscious decision to adopt baby-led weaning, and she always eats what Johnny and I do, whether it’s mussels, curry or chilli con carne.

She probably has mussels once a week, which we cook and serve just as they are – because, being straight out of the ocean, they need nothing else

“She probably has mussels once a week, after going out with Johnny [to the family farm] to get a big bag, which we cook and serve just as they are – because, being straight out of the ocean, they need nothing else.

“Of course she still loves her chocolate buttons – who doesn’t? – but I do think that by introducing them to different foods early on, they are more likely to eat what is put in front of them.”

Peadar Maxwell, a child psychologist, says broadening children’s tastes is important and having the same food for the whole family is a great way to encourage adventurous eating.

“Don’t assume children only like fast or ‘child-friendly’ food,” he says. “Give them what you are eating and in restaurants ask for a half-portion of a real meal instead of a children’s menu, and vary their diet with different healthy options.

“Fussy eating is a problem – but not really in Mediterranean societies, and even less in countries where food is scarce, so maybe Irish families offer too much choice or have become too reliant on the convenience of processed food.

“So if parents are trying to encourage more adventurous eating, they should let the child see them trying and enjoying new things. It doesn’t mean you have to lie about how much you love a food. Just play down any bad reaction you might have, and highlight if you genuinely like it.”

Ten tips to get kids to try new foods

1 Offer a wide variety of foods from as soon as it is safe to do so.

3 Let children help with the sourcing (or buying) of food.

4 Allow them to help prepare dishes.

5 Offer very small portions of new foods (as tiny as two peas) when they are first introduced.

6 Children love to dip foods, and sauces such as teriyaki, low-fat ranch dressing, sweet chilli, and honey and mustard dressing can be great for getting them to try new foods.

7 Add spice or fruit to food and serve with some cooling side dishes.

8 A healthy appetite is important, so don’t let them snack constantly during the day.

9 It takes repeated presentation without pressure to get used to a new taste, so encourage experimenting in a calm environment a few times a week.