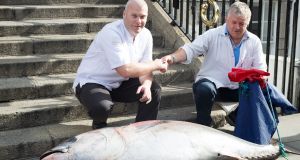 Sean Smith, head chef at the Cliff Townhouse, with Donal O’Sullivan of Shellfish De La Mer, who delivered the bluefin to Dublin.

A rare bluefin tuna weighing a whopping 106kg was delivered to Sean Smith, head chef at the Cliff Townhouse in Dublin 2, on Tuesday morning. The tuna was caught by Irish fishermen about 200 miles off the coast of Cork.

According to Donal O’Sullivan of Shellfish De La Mer in Castletownbere, who sold the fish to the chef for €1,000, the capture of such a big bluefin in Irish waters is a unusual occurrence which happens maybe once a year at most, when the warm Gulfstream is closest to Ireland, as it is now.

Bluefin is premium sushi fish, often fetching record prices at auction in Japan. In January a 278kg bluefin tuna sold for €2.6 million at the first fish market of the new year at Tokyo’s Toyosu fish market.

“I’ve had bluefin in before, but when you’re buying it from abroad, you’re never sure just how fresh it is. This was landed on Friday and in my kitchen on Tuesday,” Smith said.

As bluefin’s conservation status is “endangered”, Irish fishermen are not allowed to fish for it and must follow a by-catch procedure which allows them to land one only if it is caught while they are fishing for albacore tuna.

It took chef Smith an hour to break down the giant fish, and the 60kg of tuna he was left with then had to be frozen for 48 hours, a regulatory procedure, before it can be eaten.

It will now make its way on to the restaurant and hotel’s menu later today in dishes such as tuna tartare, Niçoise salad, and lightly pan fried with wasabi and seasonal greens.

“I’ve had a 50kg bluefin before but nothing as big as this,” said Smith. The fish will yield approximately 100 portions. “I’m actually looking for more. The quality is unbelievable; the fattier cuts are just like wagyu beef.”