A pretty mouthful: Edible flowers are growing on us

Food File: Order edible flowers from west Cork, get spoiled with olive oil and get a flavour of Waterford 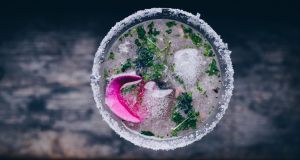 When Mags Riordan and her daughter Emma Riordan Davies of Bumblebee Flower Farm in west Cork were asked to make an edible flower posie in 2013, it opened up a whole new avenue of business.

“A bride had concerns for her flower girl eating her posie, and knowing that our flowers were organic, she inquired if it was possible to have edible flowers in Sophie’s posie, and there it began. I realised that over 60 per cent of the crops I had been growing were in fact edible. We began to identify the ones with the best flavour and took it from there,” Riordan says.

The farm now cultivates flowers organically grown for culinary purposes, and their use goes far beyond a few petals sprinkled on a salad. “Last summer we stepped into the world of cocktails, initially using the edibles as a garnish, but this has accelerated, with Emma developing floral and herbal syrups.”

An online shop at bumblebeeflowerfarm.ie will be launched soon. There will be a salad mix, a cocktail mix and a cake mix, with the selection tailored to each purpose. The mixes will cost €40 plus €10 p&p.

Get to know olive oil

If you want to know your arbequina from your picual, you can spend a full day learning about olive oil from an expert in the field at an olive oil masterclass at the Fumbally Stables in Dublin next month.

It is being organised olive oil sommelier Karen Cryan, and will be conducted by Simon Field, an industry expert and organiser of Savantes, a worldwide body that promotes olive oil education.

On the first day there will be sessions on taste and flavour, identifying common defects, tasting of varietals from around the world, and health attributes of olive oil.

Having given the nose and palate a rest, participants will return the next morning to undertake the two-hour Savantes tasting test. Those who pass will be eligible to become associate members of the organisation. It’s a tough test – when Cryan took it she was one of four out of 11 to reach the required standard – and success brings with it recognition as an olive oil sommelier.

The Waterford Harvest Festival (September 8th-10th) has some really interesting events planned. The Three Sisters dinner – named after Nore, the Barrow and the Suir rivers – takes place at The Bay Tree Bistro on the final evening. It will bring together Waterford, Wexford and Kilkenny chefs for a dinner starting at 6.30pm and costing €60.

Manning the stoves will be Ken Harker from The Lady Helen at Mount Juliet, Billy Whitty from Aldridge Lodge, Paul Hynes from La Côte and Keith Boyle from the host restaurant. In an interesting spin, three of their wives and partners – Carmel Boyle, Edwina Hynes and Joanne Harding – will have front-of-house roles on the night.

On the final day of the festival, there will be a rare chance to eat Takashi Miyazaki’s accomplished Japanese food in a sit-down restaurant setting rather than from his Cork city takeaway. He is currently on the hunt for a bigger premises as his current location has only a six-stool counter for eat-in diners.

Miyazaki is taking over La Boheme for a lunch service, where he will serve a nine-course kaiseki banquet menu. Snack, starter, soup, meat or seafood, a stewed dish, a grilled dish, a fried dish, rice, dashi and pickles, and finally dessert, will be served. The cost is €75. waterfordharvestfestival.ie