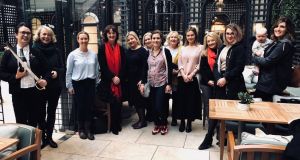 Nisea Doddy, chief sommelier at the Shelbourne hotel, welcoming the Irish Times group to a demonstration of sabrage

On a bright sunny morning in mid-November a group of food lovers gathered outside Chapter One, the Michelin starred-restaurant on Parnell Square, for a Food Month at The Irish Times food tour.

The 10 ticket holders, plus their guide, food writer Marie-Claire Digby, were embarking on an access-all-areas tour of some of the city’s most enduring and innovative restaurants and hospitality venues.

Ross Lewis, chef proprietor at Chapter One, explained the workings of the restaurant and took the group on a tour of its public and private dining spaces, the kitchen and prep areas, and revealed the latest addition to the restaurant’s extensive art collection.

A short walk took the tour to Brother Hubbard North on Capel Street, where co-owner Garrett Fitzgerald showed off the shop’s new in-store coffee roastery – Farmhand Coffee – while explaining his route from a career with the Irish Energy Regulator to becoming a Ballymaloe-trained chef and cafe owner. There were samples of the cafe’s most popular Middle Eastern-inspired sweet and savoury dishes to try, along with single-origin filter coffee roasted on the premises by Peter Szaloki.

Across the river, Niall Sabongi and his crew at The Seafood Café in Temple Bar were waiting – with a sign outside welcoming the group. Bloody Mary cocktails were passed round, along with two types of oyster, hand dived scallops – and a fascinating discussion on how they are fished for. Irish squid hit the plancha grill, and sea urchin was on the menu for tour participants too.

Joe Macken’s latest opening, Bar Giuseppe on Castle Market, was the next stop on the itinerary. Drinking newly-arrived naturally produced Beaujolais Nouveau and snacking on aged smoked beef with mustard sauce, the group heard how Macken arrives at the concepts for his restaurants and chatted about the Dublin dining scene.

At the Shelbourne hotel, the last stop on a three-hour journey of culinary discovery, director of sales and marketing, Yvonne Donohue, was waiting to escort the group to the hotel’s new outdoor terrace space, where head sommelier Nisea Doddy demonstrated the ancient art of sabrage, deftly removing the cork from a bottle of Laurent Perrier Champagne with a ceremonial sabre.

In the Lord Mayor’s Lounge, executive head chef Garry Hughes introduced the hotel’s afternoon tea, around 1,000 of which are served to guests each week, and the group sat down to enjoy it at a prime table by the window overlooking St Stephen’s Green, glasses of Champagne in hand.