First look: The new afternoon-tea lounge at the Shelbourne

The Shelbourne's executive chef, Garry Hughes, talks through the process of creating afternoon tea at the hotel. 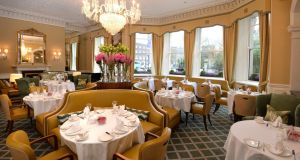 “If we could open at nine o’clock in the morning, I reckon we could do five sittings a day.” Afternoon tea at 9am, surely not? Garry Hughes, executive chef at the Shelbourne Hotel, is talking about the incessant demand for reservations for afternoon tea in the hotel’s Lord Mayor’s Lounge.

Between 900 and 1,000 lavish afternoon teas are served there each week, and the dainty sandwiches, buttermilk scones and artful pastries contribute almost €2 million in revenue to the hotel’s coffers each year.

“A quiet day in the Lord Mayor’s Lounge is 100 teas, an ordinary day is 150,” says Hughes. “When I came here first, the room was doing only about 10 or 12 people a day for afternoon tea. I am amazed by the interest.”

To cope with demand, the first afternoon tea tables at weekends and on bank holiday Mondays are seated at 11.30am and service continues, with four two-hour slots, until 7.30pm.

Gone are the squishy armchairs and sofas, replaced by a more streamlined arrangement dominated by a centrepiece leather banquette. The colour palette is golden yellow, pale green, cream and ivory, and an extra 10 seats have been fitted in, reducing those weekend wait lists a little.

The grand piano is still there and has been joined by a pair of Chinoiserie cabinets that will serve as pantries. A 19th-century Waterford Crystal chandelier, original to the hotel townhouses, has been reinstated.

To coincide with the unveiling of the revamped space, a new afternoon tea that has been nine months in the planning is also being launched. “When I saw the drawings come in for the room, I knew we had to take it back to a classic tea,” Hughes says, after a series of themed teas celebrating such things as the hotel’s Princess Grace connection, and Michael Flatley’s paintings.

For research purposes, executive pastry chef Caoimhe Hanafin, who designed the new tea in conjunction with Hughes, was dispatched to London in December, tasked with eating six afternoon teas in two days, taking in the Berkeley, the Savoy, the Connaught, the Ritz, the Langham and Rosewood London.

“She came back with so much confidence in what we are doing,” Hughes says. Apparently not all of the London offerings tasted as good as they looked. “It’s about visual impact first, it’s got to look amazing, but then I want you to be able to close your eyes, and taste. . .”

In a new departure, the entire food offering is being presented at once, on a specially commissioned four-tier stand, rather than a rectangular platter of sandwiches being served first, followed by a three-tier cake stand of scones and pastries. The move will streamline the service and cut down the number of times service staff will visit the table.

“I came in for tea with my wife, she thought she was being treated, but I was actually doing a time and motion study of how often somebody visited the table. On average it was 13-15 times,” Hughes says. “Some people could find that intrusive.”

On the bottom tier, the hotel’s buttermilk scones (up to 1,000 of these are made every day) are joined by mini-gingerbread loaves, moist and squidgy and fragrant with spice.

On top of these is the savoury plate, with two each of four types of sandwich. The hotel’s house-smoked salmon is served on a dainty round of Guinness and treacle bread, with pickled cucumber and lemon gel.

“We smoke 10,000 sides of salmon a year,” Hughes says. He cures the fillets for between 16 and 24 hours in his specific mixture of sugar and salt. “It is generally 2:1 salt to sugar. I do the opposite, sugar to salt.” Dots of lemon gel, made by blanching and refreshing lemons 10 times, then blitzing them and passing them through a sieve, before turning them into a gel, add colour and acidity.

Pumpkin seed bread is topped with Irish goat’s cheese, feather-light slivers of cherry tomato, and chives. Avocado and chicken in a light mayonnaise is the stuffing for petite poppy seed rolls. Only the last savoury on the plate, egg mayonnaise and cress, comes in a traditional finger sandwich. “I wanted to avoid a big plate of finger sandwiches,” Hughes says.

Topping the savouries are two identical plates, one per person, of edible artworks. This reimagining of the classics sees pannacotta, cheesecake, lemon drizzle and chocolate éclair put on their finest finery and join the party.

Hughes suggests guests should start with the pannacotta, which is topped with rhubarb jelly, aerated rhubarb foam, and a tiny Swiss meringue. The cheesecake has a sablé biscuit base, and the strawberry and vanilla filling has a surprise lime jelly centre. Strawberry glaze and a jaunty sugarwork frill are the finishing touches.

But it’s the éclair that Hughes is saving for last. “This is my favourite . . . the textures, the crunch . . . I could sit down and eat a box of those,” he says. The choux pastries are filled with praline mousse, dipped in caramel, topped with nibbed, roasted almonds and more praline mousse, before getting a final flourish of a tempered chocolate wafer embossed with the hotel’s name and logo.

“Normally we change the tea every four months, but I’m going to try and get the rest of the year out of this one, because we put so much work into it, and I’d love everybody to see it,” Hughes says.

There is no getting away from it, it is a lot of food, for a meal that is neither lunch nor dinner. “Generally, you’ll see a lot of black Shelbourne cake boxes going away and that’s fine, it is great advertising. When we’re finishing up the sittings there’s literally someone standing there for 30 minutes assembling boxes for takeaways.”

The Modern Classic Afternoon tea in the refurbished Lord Mayor’s Lounge at The Shelbourne costs €49 per person (€64 with the addition of a glass of Champagne). “It is a day out for people, so it is important that we get it absolutely right,” Hughes says.

And is he happy with his team’s creation? I love it, but I know that in about two weeks’ time, when it is up and running, we will want to get our teeth into the next one. That’s the way chefs are built: ‘We’ve done that, now what’s the next thing?’ ”

Guy Oliver: ‘I wanted to celebrate the grandeur of the hotel’

“My team and I spent a lot of time researching the history of the hotel, looking at the archives here and those held with the city. I wanted to respect the historical and social context of the Shelbourne. This is one of Ireland’s grand hotels, and the Lord Mayor’s Lounge is Ireland’s iconic drawingroom.

“The thing I most like about the Shelbourne is that it is used as much by local guests as by international visitors. This place is central to the history of Ireland and I wanted to celebrate the grandeur of the hotel, welcoming guests but also giving them a sense of where they are.

“The room is primarily used for afternoon tea and I chose a yellow and green scheme which felt fresh and light. In the mornings, guests can meet here for coffee served on the walnut tables, but in the afternoon out come the crisp linen tablecloths for one of the best afternoon teas in Ireland. By evening, hotel guests can relax by the fire with a drink.

I am an Irish citizen and I am proud to have worked on this project, particularly with all the historic associations

“I wanted the room to feel light, airy, understated and elegant. Of course, visual impact is important – guests should feel that they are somewhere special, but also comfortable and 'at home' when they arrive. I hope I have achieved that.

“The hotel owns a number of original 19th-century light fittings and there were always two chandeliers in the Lord Mayor’s Lounge. I found a beautiful pair of chandeliers that were hanging in different areas of the hotel – the second one is being restored and we hope to have it installed by the end of May.

“The Chinoiserie cabinets were specially designed and made for the room. They are black lacquer with gold leaf and were hand painted and gilded by an artist friend that I have worked with throughout my career.

“It is not quite finished yet – there are still some very nice finishing touches to come. I am an Irish citizen and I am proud to have worked on this project, particularly with all the historic associations. I hope it will be seen to be the right kind of enhancement, feeling as though it were ever thus.”