‘A year ago I would have said no, it’s all hot air. But Cork in general has a very optimistic air about it at the moment’ 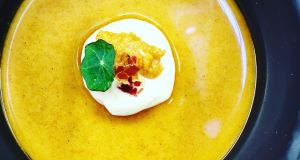 Is Cork the new culinary capital of Ireland? The question arises as the city and county see a succession of recent and upcoming high profile new restaurant openings, fuelled by an influx of well known chefs.

In the city centre, Takashi Miyazaki is preparing to bring Japanese haute cuisine to the former Fenn’s Quay premises, with the opening, on April 20th, of ichigo ichie. The restaurant will offer a 12-course tasting menu (€95), served to a maximum of 25 diners each night.

Within a week of reservations for the coming three months going live on the restaurant’s website, the prized five seats at the chef’s counter, where Miyazaki will prepare part of the menu in front of diners, were booked out for all of May, much of June, and half of the July dates were snapped up too.

In the village of Ballydehob in West Cork, The Chestnut, a former pub and airbnb rental, has been given a new lease of life as a dining destination, with chef Rob Krawczyk at the helm. It will be known as Restaurant Chestnut. Krawczyk, who previously headed the kitchen at Tankardstown House and prior to that O’Brien Chop House in Lismore, grew up 10 minutes’ drive from Ballydehob, and his father, charcuterie expert Frank Krawczyk, still lives in the area.

The Eccles Hotel in Glengarriff, a popular wedding venue, is also ramping up its culinary offering, with the engagement, last month, of former Great British Menu TV show contestant Eddie Attwell, to oversee its kitchens. Attwell, who is from Nutts Corner, Co Antrim, twice represented Northern Ireland in the popular BBC2 programme, and was previously head chef at St Kyran’s Country House in Virginia, Co Cavan.

Both Krawczyk and Attwell are being supported in their new ventures by their partners. Krawczyk’s girlfriend, Elaine Fleming, who was the wedding co-ordinator at Tankardstown for five years, is running front of house at The Chestnut, which opened its doors to customers last Thursday.

At Eccles Hotel, Eddie Attwell’s number two in the kitchen is his partner, Rebecca Doran, who filled the same sous chef role at St Kyran’s. Andrej Zak has also moved from the Co Cavan country house to work with the couple as junior sous.

The hotel also has a new general manager, David Manning. “We are enthusiastic to bring Eccles Hotel back to its former glory. We can really see the potential of the property. It is an amazing journey we have begun and we are going to have a lot of fun along the way,” Manning says.

In Cork, ichigo ichie will be a sister establishment to Miyazaki, a takeaway on Evergreen Street with just five eat-in counter stools, where the chef, originally from Fukuoka in southern Japan, has been wowing diners since opening in 2015.

It will be a kappou restaurant, meaning that the cold dishes on the set menu, including sushi and sashimi, will be created by the chef working at a counter in full view of some of the diners. Miyazaki says the style of the restaurant will allow him “to explain dishes to the customers” and interaction with the chef will be part of the dining experience.

The name of the restaurant means one time, one meeting; literally interpreted as once in a lifetime, and Miyazaki will be creating formal, 12-course seasonal menus, known as kaiseki, that will be served to diners seated in three distinct areas. In addition to the five at the counter, there are eight seats in the zen garden and a further 12 in the Nagomi room.

In Japan, kappou restaurant counters are traditionally constructed with cypress wood. According to Miyazaki this is because the distinctive smell of cypress compliments raw fish, and although he won’t be using it for his counter, he hopes to mimic the effect by using a cypress chopping board.

“I have a teak board and a cypress board at the counter and I use the cypress one just for sashimi. It looks and smells unreal. Also I’ve got cypress incense for the entrance hall.”

At Restaurant Chestnut in Ballydehob, Rob Krawczyk is aiming for a style of food “not hugely different from what I’ve been doing; only three or four elements on the plate, using the best produce from around here”.

The pub has been sympathetically restored and has 18 restaurant seats plus a bar counter at which, once he has finished building his smoke house, Krawczyk will be serving his signature charcuterie. Informality and conviviality are at the heart of the new enterprise, and Krawczyk says he wants it to be “somewhere people feel comfortable”.

The dinner menu (€50 for three courses, plus snacks and a sorbet) has just two choices of starter, main and dessert, and the offering could change daily, he says. “There are a lot of growers around here, but they produce small amounts. I might not get a week’s supply.”

Chicken wings, cockles, cod, mutton, rhubarb and chocolate were the building blocks of the dinner menu for last week’s launch. The restaurant also offers a seven-course tasting menu (€65), that must be ordered in advance, and Sunday lunch (€35).

Food writer Trish Deseine, who lives locally, was among the first night diners on Thursday of last week. “The Chestnut is a moody, romantic yet sophisticated take on the gastropub and Rob’s cooking is confident and mature, with an innate understanding of how to treat West Cork’s superlative produce. We’re so lucky he’s come home,” was her verdict.

In scenic Glengarriff, Eddie Attwell, whose CV includes the Michelin two-star L’Enclume in Cumbria, is taking a steady-does-it approach to revamping the food at the Eccles Hotel.

His first task has been to design an all-day bistro menu, and the new offering features dishes such as crubeens with smoked Gubbeen cheese; and mussels from Bantry Bay, just outside the hotel’s front door, with cider, barley and apples.

“People are saying it’s the rebirth of a West Cork star, and I would like to stick to that. We want to make it a food destination,” Attwell says. “But it will be baby steps. I want a nice bistro menu that caters for everyone, and I’ll also be doing weddings – a new thing for me – for up to 300 [people].”

He says he is “putting his stamp and twist on things”, beginning with growing as much as he can of the kitchen’s fruit and veg requirements. This was his first request of his new employers. “Most people would ask for a car, I asked for a polytunnel. There’s a flat roof on the kitchen, and I’ve already been up there to see about a rooftop garden.”

Back in Cork city, amid the influx of newcomers, including last year’s first foray into restaurant ownership by TV chef and Ballymaloe Cookery School tutor Rachel Allen, an old timer is celebrating a significant birthday.

Vegetarian restaurant Paradiso (formerly Café Paradiso), is marking 25 years in business. Co-owner Denis Cotter says things are looking up for the restaurant trade in the city. “A year ago I would have said no, it’s all hot air. But Cork in general has a very optimistic air about it at the moment.”

My misanthropic father would have embraced social distancing
9