Put spring on your menu 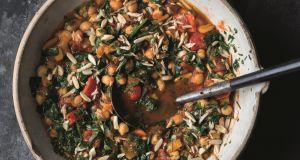 Brighter weather brings with it a desire to eat differently – hearty soups, stews and casseroles giving way to something fresher and lighter. Stuck in a cooking rut and unable to see beyond my slow cooker and Le Creuset casserole pots, I found inspiration in an unexpected place recently.

Writing with her sister Jasmine as Hemsley + Hemsley, Melissa Hemsley fell fair and square into the “clean eating” category. But, for 2018, the duo have diverged. Jasmine published a cook book at the start of the year inspired by her explorations of Ayurveda, and Melissa followed with Eat Happy: 30-Minute Feelgood Food (published by Ebury Press, €23).

Tasty, easy, nourishing and thrifty were the criteria for recipe inclusion in this book, she writes. The salads drew me in – particularly a recipe for hot-smoked trout with beetroot and fennel salad and a Scandi-style dressing – but it was the “bowl food” chapter that I’ve been returning to, for colourful, Spanish chickpea and almond stew; lime and avocado gazpacho; ginger miso sunshine soup, and courgette “risotto” (made with quinoa), with a pesto swirl.

Cold winter weather and snow has delayed the arrival of Peter and Marita Collier’s eagerly awaited Irish asparagus crop by almost a month. “There’s not a sign of it popping up this year,” Marita said at the end of March. “I checked back, and on March21st last year, I had my first crop.”

This time around, she expects to be cutting her first spears at Drummond House farm in Baltray, Co Louth, around the middle of April.

But there is good news to go with the delay. “The colder it gets, and the longer it stays cold, the sweeter it will be,” she says. With three acres under cultivation for this crop, a sideline to the farm’s massive garlic production, she hopes to harvest three times the 500-700kg she took out of the ground last year, now that the crowns have had a further 12 months to settle.

The majority will be distributed to restaurants by La Rousse Foods, and some will be on sale in selected branches of Dunnes Stores.

Later in the year (end of May into early June), Dunnes will also be selling Drummond House garlic scapes, the flower bud of the plant which is most often used to make pesto. The scapes will be sold in cellophane wrapped bunches, with three recipes attached, and will be available in more than 100 branches of Dunnes Stores.

The biennial Dublin Gastronomy Symposium 2018 (May 29th and 30th) has “Food and Power” as its theme. More than 50 speakers will address this topic in a variety of ways and the keynote lecture will be given by Marion Nestle, professor of nutrition, food studies and public health at New York University.

The event, hosted by Dublin Institute of Technology, is open to the public and full access tickets, including meals, are available to purchase at Eventbrite.ie, for €230.