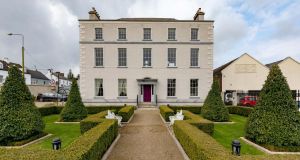 The term landmark building could have been coined for Creamery House, the imposing four-storey Georgian residence that towers over Market Square in the Co Kilkenny town of Castlecomer.

The house, originally built in 1750 by the town’s landlords, the Wandesfordes, was burned down by the Wexford Rebels in 1798 and rebuilt the following year by Lady Anne Wandesforde, Countess of Ormond. It has been recently restored, and stands as a beacon of better times for the former coal mining town, now perhaps best known for Castlecomer Discovery Park, an 80-acre recreation facility.

There is a new hotel on the main street, Avalon House, open just a month, and today (April 6th), the town launches a bid to get on the gourmet map with the opening of Restaurant Lady Anne at Creamery House. One of the most eagerly anticipated new openings in the south-east, the newcomer is being launched by Keith and Carmel Boyle, who previously ran The Bay Tree Bistro in Waterford city, initially in Ballybricken and more recently at another premises on Merchants Quay.

The Boyles are leasing the basement and ground floor of the historic building from its owner, local man and bio-pharma entrepreneur John Comerford. Set back from the main road, behind beautifully manicured gardens, the house was rescued from dilapidation by Comerford, who bought it in 2012 and has painstakingly restored it.

“I actually bought the building for offices, for one of my businesses, but it wasn’t big enough for us, and from day one I thought it would be ideal for a restaurant,” Comerford explains. The upper floors of the house now have meeting rooms and offices available for hire, and the 24-seat restaurant is in the grand reception room on the ground floor, with a further private dining space in the basement.

For the Boyles, the move to Castlecomer represents a life-changing decision. “Both of us were working 100-hour weeks in The Bay Tree. We were starting at nine o’clock on a Monday morning and finishing at 2am the following Saturday,” Keith says.

The restaurant will open four days a week for dinner, and will offer a small menu of dishes that champion local ingredients, in the same way that the house was restored and refurbished using local craftspeople. Three courses, plus canapes, amuse bouche, a bread course, and petits fours to finish, will cost €60, and a chefs’ selection surprise tasting menu is €90.

Those are quite punchy prices for a restaurant “down the country”, but Boyle is confident that he will have no difficulty filling the 96 seats each week. Comerford points out that the county towns of Portlaoise, Kilkenny and Carlow town are nearby. “It’s quite a densely populated area. Within seven miles there is a population of 10,000.”

On arrival, diners will be able to have a pre-dinner drink at a small bar area – wine and bottled beer only – while catching glimpses through two glass panels of their meal being prepared in the purpose-built kitchen. Menus will only be presented when seated in the tall-ceilinged and quietly elegant diningroom, a feature of which is an intricate pine and gesso fireplace surround, which Comerford sourced in Co Fermanagh.

There may occasionally be eyebrows raised when it is noted that there is no steak on the menu, but Boyle is resolute that his steak-frying days are over. “It’s not a steak restaurant. In the Bay Tree we had 85 seats, we were trying to be all things to all men, so we had to have a steak.”

A starter option of sweet potato agnolotti, roast parsnip velouté, caramelised parsnip and apple will feature a rarity – sweet potatoes grown in Ireland. These are coming from Pat Fitzgerald, of Fitzgerald Nurseries in Stoneyford, Co Kilkenny, where wasabi is also being successfully cultivated as part of a range of test crops.

The bread course will have three choices – hot boxty, sourdough, and Costelloe red ale soda bread, accompanied by chicken butter and a house-made butter for which Keith is trying to source raw organic cream.

The Lady Anne menu descriptions are sparse – and this is deliberate. “It’s better to under promise and over deliver,” Boyle says. In addition, he believes that it will encourage guests to interact with the front of house, led by Carmel, as they seek more information on the dishes.

Organic chicken, soft yolk, buttered leeks and morels, for example, sounds fairly straightforward. But Boyle explains that it will feature chicken fillet brined in a local Kilkenny pale ale for 24 hours, an organic egg yolk cooked in olive oil at 65 degrees, and chicken emulsion. Both the chicken and the morels will have stuffings, made from the trimmings of the meat and the mushrooms. The launch menu has been “months in the planning”, he says.

Carmel, who is also the restaurant’s sommelier and will conduct wine tastings in the house’s original cellars, says she is “nervous” as opening day draws close. But she too is happy with the new direction the couple are taking. She says that a tipping point came when she had an elderly woman in the restaurant in Waterford, and was too busy to be able to spend time with her. “She told me she was 91, she kept holding on to my hand, all she wanted to do was talk.”

For Keith, it’s all about the food, and having the time and the opportunity to elevate his cooking. “We’ve got a chance to do the food we want to do, in a setting like no other, with someone as passionate as John behind the scenes.”