It’s all about the lobster in this terrific little place 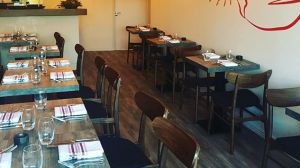 The man is not so much a walk-in as a blow-in. “Brrrhuh,” he says as he’s pushed in the door by a blustery easterly to ask if he could grab a table. He lives up the road and wants to try the place out. He returns with his wife. I reckon they’re set to become regulars.

Lobstar, in the south Dublin suburb of Monkstown, is a narrow room with a window at the front and tables along each side. It’s lit by candles and filament bulbs. The walls are lined with those familiar white tiles with red and black lines at the top to take the urinal look off them. The floor and tables are in the same distressed timber finish. I’m the first here and get offered the seat by the heater. Memories of crawling traffic and the eerie way Google maps has of knowing how congealed the road ahead will be all fade nicely to a soundtrack of great jazz and the feeling that good things will happen here.

Chef and co-owner Zsolt Zakar is all about the crustacean. Yes they do steak here and by rights one of us should have it but to hell with that. In a restaurant called Lobstar, where the menu offers lobster five ways, there is only one way to swim and we’re going lobster two ways with the flow.

But first there is other fishy fun to be had. Galway Bay oysters are joined in their shells by tiny bursts of apple, celery and cucumber, all finished with micro coriander. My only complaint is that there are too few. They’re presented on a plate covered in rock salt which is only noticed after some shared tuna got crusted in the crystals. So beware. My yellowfin tuna is given its Hawaiian name Ahi tuna and served as a poke (pronounced pok-hey), the Hawaiian for sliced. It’s cut into small chunks raw like steak hache and marinated in sesame oil and soya sauce. It sits in the middle of the plate like a burial mound, shards of scallion and very mannerly green chilli are added to the mix along with sesame seeds. The luscious tuna meat comes with springy fresh “rustic bread” which is a tribute to the baking talent in the kitchen.

The star turn is the half lobster, split open and served with a fire-engine red claw cracker and a winkler to get every edible shard to your lips. It’s a small lobster but the tail meat is soft and delicate. This tenderness is a local characteristic, not the local humans but the local lobsters, which are less rubbery than their American cousins. This half one has all the rummage and slurp of a great lobster meal. My dad does a full Pretty Woman when a shard of claw shell escapes the cracker at high velocity. Luckily no patrons are shrapnelled. The excellent waitress disappears the debris from the floor with a smile.

The diner who doesn’t want to work so hard can try the “New York style” lobster roll where the tail meat has been tumbled in good mayonnaise served on a hot dog bun turned biscuity with (I’m guessing) a butter drizzled grilling. There’s a nice fennel and mango salad, though it’s a little larger on leaves and lighter on fennel than I’d like. This is made up for by the chips. They’re skin-on, twice fried and salted just so. A more decadent version of the chips are served in a bowl with truffle mayonnaise and a thick blanket of freshly grated parmesan.

Desserts are surprisingly impressive for a neighbourhood seafood joint. My chocolate mousse is a dense, spoon-sticking rugby ball of dark intense chocolate finished with salt to add an edge. There’s a mango and basil purée and some basil leaves to amp up the herby sweetness. It’s good enough that I’ll forgive the unseasonal raspberries dotted on the plate.

The other dessert is so much better than its menu description. Say white chocolate and Bailey’s cheesecake and I shudder, picturing something gelatinous, cloying and going slightly rubbery around the edges. This is a deconstructed version with a fluffy topping piped onto the plate and sprinkled with cinnamon and ginger shortbread. It’s cheesecake redeemed from the duff dessert pile.

We’re on the early bird so dinner here is a steal, even with the €6 supplement for the half lobster. The star in Lobstar is the Irish lobster, our most spectacular seafood. It’s found a great home in this terrific little place.

Dinner for two with a glass of wine, sparkling water, coffee and tea came to €78.55.