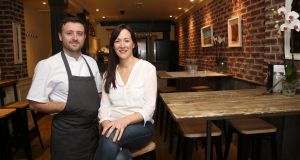 The Michelin Guide to Britain and Ireland has released a small blizzard of Bibs to Irish restaurants on Twitter this afternoon. The Bib which is awarded for “good quality at good value” went to four Dublin restaurants, one restaurant each in Kildare, Clare and Galway city and to a restaurant in Holywood, Co Down, which has been open for just over a year.

“We spend a lot of time deciding on our Bibs - there are two elements for this award simple yet skilful (sic) cooking and great prices,” Michelin said before announcing each new bib.

The four Dublin restaurants, all on the southside, were chef Barry Fitzgerald’s Bastible on the South Circular Road, Ciaran Sweeney’s Forest and Marcy on Leeson St, Philip Yeung’s Craft in Harolds’ Cross and Richmond on South Richmond St run by Russell Wilde with chef David O’Byrne.

Chef Jess Murphy in Galway restaurant Kai won a Bib along with Hugh McNally’s third-generation pub Morrisseys of Doonbeg, in Co Clare. Husband and wife team Nicola Curran and Josef Zammit won a Bib for their canalside restaurant Two Cooks, in Sallins, Co Kildare and Noble in Holywood, Co Down was the newest restaurant to make the list.

Saul McConnell, Noble’s joint owner with chef Pearson Morris, said they had reached the end of an “amazing year” having opened Noble in Holywood in a former BYOB bistro just over a year ago.

“Jonathan from Michelin came in recently,” McConnell said, and got them to fill out the official form. Their restaurant got a visit from Observer food critic Jay Rayner during the summer and he described the food as “stupendous cooking”. McConnell worked for seven years as a manager with Belfast chef Michael Deane, and his chef partner Pearson Morris worked for six years as a chef with Deane, the final two with Michelin-starred chef Danni Barry in Belfast restaurant Eipic, before the two men started their own place.

McConnell said they were delighted with the award. “We’re a neighbourhood bistro. We’ve some people who come into us three times a week so we don’t really want to be too high end.” Michelin described the new restaurant as “small but perfectly formed”.

In Dublin Barry Fitzgerald, chef owner of Bastible said he was delighted with the Bib. “We weren’t really going for a star to be perfectly honest. We’d want to take it up a notch so that’s fine. With family life, a star would be quite stressful,” he said. Not being in the city centre meant the accolade should also bring tourists who wouldn’t otherwise make it to the South Circular Road. (Read The Irish Times review of Bastible here)

Russell Wilde rang chef Dave O’Byrne “the minute I saw it on the phone and he started shouting down the phone he was so happy. And he’s not the most expressive individual, being a chef, but he was just so happy.” Richmond celebrates its second birthday in December having opened in the all-night wine and fry place The Gigs Place on a quiet strip of South Richmond St. (Read The Irish Times review of Richmond here)

Forest and Marcy head chef Ciaran Sweeney said the new Bibs were “great for Dublin” and a recognition of cooking at all kinds of levels. He said he was still finding his feet as a chef and the business was finding its feet. Was he hoping for a star? “We just do as we do and see if it comes,” he said. (Read The Irish Times review of Forest & Marcy here)

Philip Yeung of Craft in Harold’s Cross said he was “delighted, surprised and emotional” about the news. A busy lunch sitting meant they didn’t find out immediately, he said. the Michelin inspector had asked to speak to him after dining in the restaurant “He said he really enjoyed it and he was thinking of putting us in the guide in some way or another.” (Read The Irish Times review of Craft here)

Hugh McNally, owner of Morrisseys in Doonbeg, said the pub had been in the Michelin pub guide for three or four years so it was a “fantastic honour” to be recognised for their food. He said he gave their local fish supplier CS Fish credit for the quality of the seafood they serve in the pub.

Michelin described chef Jess Murphy’s Kai as having “ingredient-led cooking” that was “a great fit for the city.” Staff at Kai hadn’t heard about the Bib when contacted by The Irish Times. Murphy was travelling to France for a friend’s wedding when the news broke and said her phone was going crazy when she landed. “I’m still in shock, really,” she said of the win. “It’s been a great year for Kai and the team, but truly a great year for Galway.”

Ross O’Carroll-Kelly: ‘They want us to vacate this place so they can use it as a love shack?’
6

Seán Moncrieff: I’ve fallen out of love with America
8

Delicious things to do with pumpkins
Real news has value SUBSCRIBE