Dublin institution Nico’s to close after more than 50 years 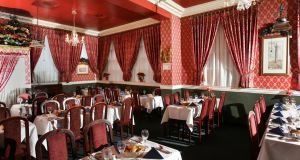 One of the oldest and most traditional Italian restaurants in Ireland will close its doors for the last time next month with its owner of more than 40 years deciding its time to take a break.

For years after it opened its doors in 1963, Nico’s Restaurant on Dublin’s Dame Street was one of the few places in Ireland where decent Italian food could be found.

It played host to an almost endless stream of politicians and celebrities and lived through booms and busts and Celtic Tigers and cataclysmic crashes.

But even though Nico’s remains as busy as it ever was, its time is up and last orders will be taken on the evening of November 10th, after which owner Emilio Cirillo will retire from the restaurant he bought with his partner Graziano Romeri in 1977.

Nico’s was born 55 years ago when the first owner Ruggero Nico resigned from his job as a butler in the Italian Embassy in Dublin and opened a family restaurant at 53 Dame Street.

At the time, the number of Italian restaurants in the city could be counted on one hand and Nico’s quickly became hugely popular among the Italian community living in Dublin as well as Ireland’s political elite, with Charlie Haughey and Brian Lenihan among the more well-known visitors from Leinster House.

It was also the restaurant of choice among academics working in Trinity College as well as scores of opera singers who travelled over from Italy to perform in the Gaiety.

Nico ran the restaurant for a decade before deciding to return to Italy to run a leather business with his brother. But although Nico was gone, his name lived on and after he returned to his home country in 1973, the restaurant changed hands twice before Cirillo and Romeri acquired it in 1977

The pair had been working together in another Italian restaurant called Bernardos – Romeri was the chef and Cirillo was a waiter – before they decided to take the plunge and plant deeper roots in their adopted country.

“I think it is time, in fact I think I should have retired 10 years ago when Graziano did” Cirillo told The Irish Times. “I will miss it as it has been part of my life for almost 50 years but you have to make decisions in life and I am nearly 70 so it is time to go.”

While he has plans to lease the premises he said he had no idea as yet who would take over, but he confirmed that the restaurant – once part of Dublin in the rare old times – will be gone for good.