Four wines to try made with biodynamic grapes and minimal intervention 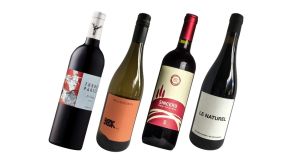 At one stage it was easy to start a row in the wine world; just mention the words “natural” and “wine”. On one side of the argument were the naturalistas, usually young, tattooed hipsters, and on the other, the traditionalists who often sported suits and silk scarves. Neither side like to admit it but there has been something of a coming together, in wine terms at least.

The natural wine movement had its roots in Beaujolais in the early 1990s, when a few producers began making wine with no chemical herbicides or fertilisers, no added yeasts, enzymes, sugar or acid; little or no sulphur dioxide during fermentation and only very small amounts at bottling, and no fining or filtration.

This bunch of maverick free thinkers pared wine back to the bare bones. They were reacting to the raft of expensive plush, oaky ripe wines that had no sense of identity, as well as cheap mass-produced highly manipulated supermarket wines.

It all sounds great, and it was; some of the time. There were plenty of fantastic, original winemakers, but others seemed to confuse wine faults with terroir. Some of the wines were brilliant and pure and bright, singing with vibrant fresh fruit. Others were fizzy, funky, and riddled with brett (barnyard-y flavours), nail polish remover (ethyl acetate) and vinegar.

Natural wine made wine cool again, wooing a generation keener on craft beer and spirits, who saw wine as complicated and elitist. In Paris, and then elsewhere, casual wine bars sprang up, offering interesting wines by the glass, alongside small plates of food. In Ireland the movement had places such as Le Caveau, Green Man, 64Wine, Etto, and l’Atitude.

The overall quality of low-intervention wine making has improved greatly. There are far fewer fizzy red wines, far fewer wines that taste as if they had been made with the addition of a little manure. As with the punk/new-wave movement, to which the naturalists are often compared, are the better producers surviving, improving and maybe even becoming more mainstream?

In my column about Beaujolais two weeks ago, I featured three red wines made by two producers who were at the forefront of the natural wine movement. Two were brilliant by any standard. At the other end, the movement made wine producers, including many large concerns, think more deeply about their viticulture and winemaking. Organic and biodynamic viticulture has become common; the use of additives seems to be lessening, although this is hard to quantify.

Natural winemakers have always resisted being categorised. Existing European regulations prohibit the use of the term “natural” wine, so the French government and a group of producers have proposed the term “vin méthode nature”. Expect other countries to follow. The four wines below are all made from biodynamic grapes with minimal intervention.