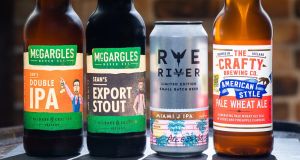 You may not recognise the name, but Rye River Brewing is one of the largest and most successful craft brewers in Ireland. Based in Celbridge, Co Kildare, the company employs 57 people and produces exclusive brews for Lidl, Tesco and Dunnes Stores, as well as selling their own McGargles beers, and seasonal releases under the Rye River name.

The brewery has been hugely successful in competitions both here and abroad. At the World Beer Awards 2020, it was the most decorated independent craft brewery for the second year running. This was a virtual judging, with the blind tasting conducted by judges online. The brewery won 30 awards in total when tasted alongside more than 2,000 beers from more than 50 countries.

I tasted four of the award-winning beers and can see why the judges enjoyed them. The IPA American Style Miami J was packed with exuberant rounded tropical fruits, finishing on a lovely soft hoppy note. McGargles Sean’s Export Stout (awarded Best Stout in the World) was powerful and full-bodied with roasted notes, caramel, cocoa and coffee. The double-award winning Dan’s Double IPA is full-bodied (8%) with grapefruit and peaches, along with a malty element. Lastly, The Crafty American-style Pale Wheat Ale (available from Lidl) mixes a sweet maltiness with pineapple fruits.

Five seasonal once-off beers are released under the Rye River label. The most recent is The Herd, which comes in a 750ml Champagne-style bottle with mushroom cork. This is a quad, a big powerful Belgian-inspired ale (quads stand for quadrupel, more powerful than dubbel and tripel) that comes in at a wine-like 13% abv. Less than 2,500 bottles were produced. Next up, in late November, is Brunch, a Baltic porter.

The McGargles beers are very widely available through independents and the multiples. See also Solas in Tesco, The Craft Brewing Co in Lidl, and Grafters in Dunnes, for a taste of Rye River Brewing.