Meatopia, for ‘carnivores with a conscience’, comes to Dublin 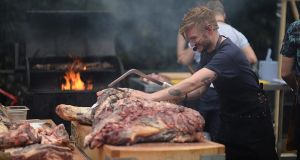 Meatopia, the food festival for carnivores with a conscience that originated in New York and also takes place in London, is coming to Dublin. On July 1st and 2nd, Guinness will host an official spin-off of the event at St James’s Gate.

The festival will take place at The Open Gate Brewery, which Guinness describes as being the brand’s home of brewing experimentation and innovation. Guest beers from independent brewers in Ireland and the UK will also be on tap for the festival. In London, Meatopia has a craft beer sister festival, Craftopia, that runs alongside the food offering.

Meatopia Dublin will have both indoor and outdoor elements, and music will be a major part of the weekend, with “an eclectic” programme promised.

The Meatopia movement includes chefs, butchers, artisan producers and brewers, who grill or smoke ethically sourced meat over sustainably produced charcoal or wood, and also participate in talks and discussions, and give demonstrations on topics such as butchery and fire management.

Sustainability and responsibility are key components of Meatopia. “Every piece of meat on offer will have been raised naturally, lived the best of lives and be totally and utterly hormone, antibiotic and cruelty free. Our animals will all be native and rare breeds. Bred, raised and butchered locally to where they lived, and sourced from as nearby as possible”, the Meatopia London manifesto states.

The line-up of chefs for the Dublin event has not yet been finalised, but is expected to include big names similar to those who line out in London, where last year the chefs’ roster included Richard Turner, executive chef at Hawksmoor, who brought the concept from New York to the UK capital; Dan Doherty from Duck & Waffle, and Tomos Parry from Kitty Fisher’s. The headliner on the international billing in London last year was Argentinian master of fire, Francis Mallmann.

Tickets for Guinness X Meatopia go on sale on June 2nd, at guinnessopengate.com/meatopia.

The fifth Meatopia London will take place at a Thames side location in Wapping, on September 1st to 3rd.